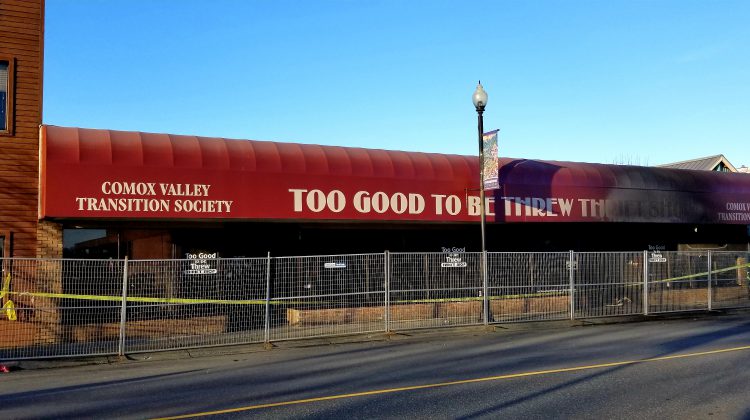 COURTENAY, B.C. – Early Sunday morning, the Too Good To Be Threw Thrift Store suffered significant damage due to a fire.

Too Good To Be Threw helps raise funds for the Comox Valley Transition Society (CVTS). The society offers assistance to women and children fleeing violence in and around the Comox Valley.

“It’s devastating for us, as it’s a big employer for several people who depend on that income, and we won’t be able to open the store for the foreseeable future,” said Heather Ney, the Executive Director of the Comox Valley Transition Society.

“It’s also devastating because it (the store) has become a significant contributor in our ability to deliver services to women and children and families.”

Ney said it’s too early to tell what exact impact the fire will have on the CVTS.

“For many people who visit the thrift store…it’s a place of social connection. So it’s gonna be a huge loss, for more than just the Transition Society,” she said.

The fire caused heavy smoke damage along the building’s front, and its glass windows were blackened.

Ney said right now, there is ongoing communication with staff on the next steps.

“We’re waiting for the insurance companies to complete their investigation, along with the RCMP (Courtenay Fire is also investigating),” she noted.

The social media response to the fire has been one of support. Ney said the entire thrift store and society team is grateful for that.

“We’ve just been overwhelmed with support from the community…it’s (the fire) gonna have a financial impact on us so donations would be great,” she said.

“I don’t know if we’ll reopen in another location or at that location down the road, but save all the things that you’re collecting…keep those aside, because we’re gonna need some inventory in the future.”

Ney added that cash donations are greatly appreciated, to help support the services offered by the Comox Valley Transition Society.

“If we are going to be reopening in a different location…we might need to assistance of trades people to get a store up and running again quickly, so that might be another need I foresee down the road,” she said.

The investigation into what caused the fire is ongoing.