RCMP seeking witnesses for Too Good To Be Threw fire 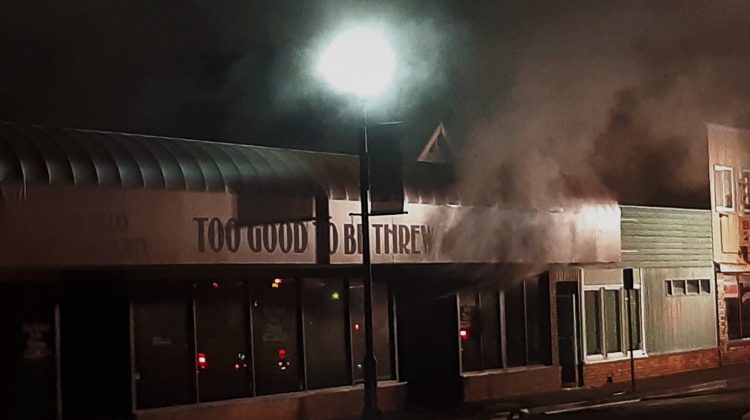 Image of smoke coming from the store, courtesy of Susan Harrison.

COURTENAY, B.C- The police are looking for witnesses to a destructive fire in downtown Courtenay.

According to Inspector Mike Kurvers, who leads the Comox Valley RCMP detachment, a uniformed officer had spotted smoke coming from the intersection of 5th Street and England Avenue just after midnight on January 20th. Checking further, he found the Too Good To Be Threw Thrift Store on fire.

He contacted emergency dispatch, and the fire department and police responded to the scene.

Too Good To Be Threw helps raise funds for the Comox Valley Transition Society (CVTS). The society offers assistance to women and children fleeing violence in and around the Comox Valley.

“It’s devastating for us, as it’s a big employer for several people who depend on that income, and we won’t be able to open the store for the foreseeable future,” said Heather Ney, the Executive Director of the Comox Valley Transition Society, speaking with the MyComoxValleyNow.com newsroom on Sunday.

Kurvers said that the RCMP are continuing the investigation into the fire. An arson investigator has visited the scene to conduct an examination, and the blaze appeared to have started at the back of the building.

“At this time, the investigation is ongoing, and police would like to speak with anybody who has any information or was in the area at the time,” said Kurvers.

Kurvers indicated that the “back of the building” included the alleyway behind the store, which includes a drop off area for goods and clothing. He did not comment on the exact starting location in the back, or cause.

Anyone with information should contact the Comox Valley RCMP detachment, or Crimestoppers.

Ney said on Monday that the transition society will not be accepting any donations of goods at the moment, due to a lack of space to house them. They’re still waiting to hear back from their insurance provider about what will happen next.

Anyone wanting to contribute financially should go to CVTS.ca and use their “Donate” link, or call their office directly.