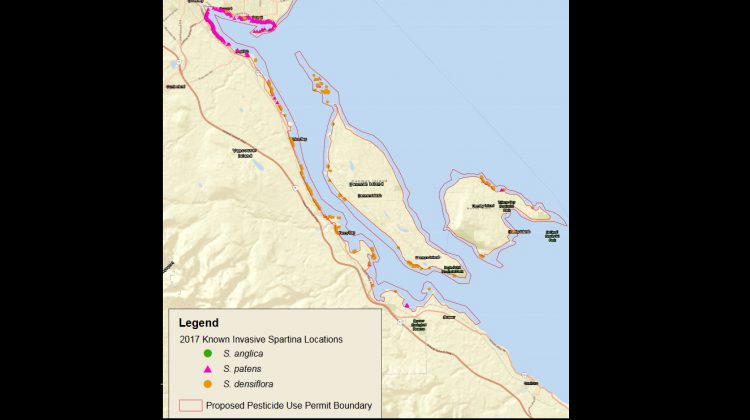 A map of the planned spraying areas, sourced from the notice.

COURTENAY, B.C- Herbicide could be sprayed along local shorelines this summer.

According to a notice from the provincial Ministry of Environment and Climate Change, the province is aiming to spray for invasive spartina, which is commonly known as cordgrass, which grows in the tidal zones.

The three kinds of spartina targeted in this spray are Spartina anglica, S. patens, S. densiflora,and S. alterniflora, all of which have been designated as noxious weeds under provincial weed control legislation.

The spraying will run from the shoreline of Comox Bay down to the shorelines of Hornby and Denman Islands, if it’s approved. It will be the third year that pesticide is used against the cordgrass.

The herbicides used would be Habitat, combined with Ag-Surf II. Registered for aquatic use in the United States, the notice states it would be applied in sparse amounts to infestations of the cordgrass on cobble beach, salt marsh, and intertidal mudflats.

It would be done during low tide, in order to ensure enough drying time before the tide came back in.

“There will be one application of herbicide to each Spartina plant annually,” read the notice.

“Hand-held spray bottles, backpack sprayers or mounted sprayers will be used to apply the herbicide. A total of less than 26 hectares of invasive Spartina are known to occur within the geographical area identified in this application. Prior to the first 3-year PUP, mechanical removal methods were used for 7 years in B.C., resulting in a continual increase in distribution and density of invasive Spartina. Areas consistently treated using chemical methods from 2013 to 2018 (e.g., for S. anglica) have seen an overall decreasing trend in size and density. This trend is expected to continue with the consistent application of herbicide.”

The notice also states that herbicide trails in Burrard Inlet resulted in decreases in the plant, and that systemic use is the only way to effectively prevent spread.

“The risk of not containing Spartina could have catastrophic outcomes for B.C.’s coastal ecosystems, navigation, fisheries, and tourism,” read the notice.

“The risk of applying small quantities of herbicide to these sensitive sites has been demonstrated to be low and may be further minimized using best practices established by the U.S.”

According to the ministry, the authorization process for the herbicide use takes an average of five months. The applicant is aiming for the permit to be in place by June 1st, 2019.

The public has the opportunity to weigh in on the permitting process, which also involves stakeholders and Indigenous persons in the treatment area.

Persons wishing to provide comment on this permit application should send them to the applicant office.

That office is the Ministry of Forests, Lands, Natural Resource Operations and Rural Development, Range Branch (441 Columbia St, Kamloops BC, V2C 2T3), and the Ministry of Environment and Climate Change Strategy (200-10470 152 St, Surrey BC, V3R 0Y3).