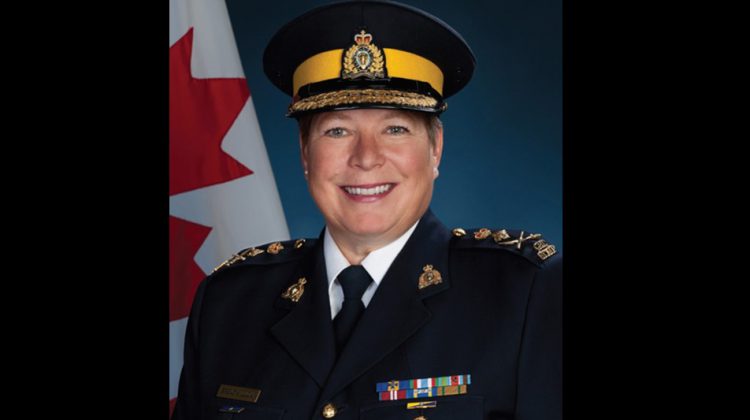 RCMP commissioner Brenda Lucki is pictured in a handout photo.

The school’s Comox Valley campus was hosting RCMP commissioner Brenda Lucki as the featured speaker for the annual Campagnolo Lecture on Restorative Justice, held from 7:30 p.m. to 9 p.m. at the Stan Hagen Theatre.

Lucki is the first woman permanently appointed to lead the RCMP, and delivered a lecture based on the theme of the role and function of restorative justice in Canada’s policing strategy.

However, she ended up facing backlash during that presentation for policing strategy used recently in Central British Columbia.

In early January, RCMP officers arrested fourteen people at the Gitdimt’en checkpoint near Houston, B.C, after a forestry service road was barricaded to prevent entry to the traditional territories of the Wet’suwet’en people.

Uniformed police officers and Emergency Response Team tactical unit members were involved in the arrest, which came after officers cut barbed wire and forced their way through the barricade.

The actions caused outcry across the country, with protests held in solidarity with camp members in multiple major cities, and the Valley.

At the college, a handful of protestors went to the stage area where Lucki had been speaking, loudly expressing their anger at the actions of the police.

According to Darren Blaney, the chief of Homalco First Nation in Campbell River and the husband of North Island-Powell River MP Rachel Blaney, the group was “pretty loud” and shocked the whole audience.

A large banner was held by the protestors, and they stood right in front of Lucki. Eventually, some members of the audience talked to them about moving along, according to Blaney.

Blaney said that one of the protestors “reluctantly moved on” while others stayed.

According to the college, a couple of Footprints security staff and audience members walked the protestors out a side door after roughly five minutes.

The full lecture continued after the protestors left the theatre.

The college also said the protest lasted till 8:30 p.m. outside.

“There were some people here who came and spoke about their concerns, vis a vis the recent actions that occurred in central British Columbia with the RCMP, and the pipeline protest in Wet’suwet’en territories,” said John Bowman, the president of the college.

“It was a peaceful protest, they made their point, and they left. It’s all part of our open democracy, and people are free to express their views, so I think it’s all good, no problems.”

EDITORS NOTE: This story has been updated to reflect more information from the college’s communication department.