‘I don’t know what I would do without them’: Comox Valley teen amputee thanks The War Amps

COMOX VALLEY, B.C. – A Comox Valley teen and his mom are thanking The War Amps for making a huge difference in their lives.

Fourteen-year-old Elijah Sulz is a right leg amputee who has been involved with the organization since he was a year old.

Elijah’s mom Caterina said if it wasn’t for the War Amps, she would only be able to afford the most basic leg prosthetics for her son who, despite being born missing his right leg below the knee, is involved in baseball, basketball, and martial arts.

“There would probably be times where he would have to go with smaller legs, not get new legs in time, because I’m really, really low income. Basically they have provided all of his needs his whole life,” she said. 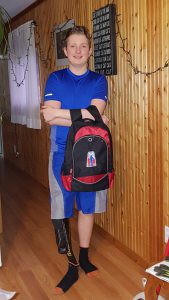 Teen amputee Elijah Sulz has been involved with The War Amps since he was a toddler.
Photo courtesy Caterina Alberti

The War Amps have also provided emotional support while helping to facilitate social connections for Elijah over the years, according to Caterina.

“Elijah’s made a ton of really good friends over the years, they pay for us to go down to Victoria and do seminars or Vancouver, depending on where the seminar is, they cover all expenses and treat us to an amazing weekend of comfort, food, and lots and lots of learning,” Caterina said.

Elijah said contributions from The War Amps have given him “a lot more freedom.”

“I don’t know what I would do without them,” he said. “They have helped a lot with all the prosthetics and support with whatever I have problems with.”

Caterina said without The War Amps, her son would have a “way lower quality of life.”

“He’d have more pain because he’d be in legs that don’t fit anymore, and he might have given up on some of his sports, depending on if he was uncomfortable,” she said. “It’s been amazing for me to see.

“It’s unbelievable, the difference each new leg makes, each new foot in his abilities.”

This marks the first week that the War Amps will begin mailing key tags to households across the country.

Those benefiting from the program often donate to The War Amps, with proceeds going to support child amputees such as Elijah.