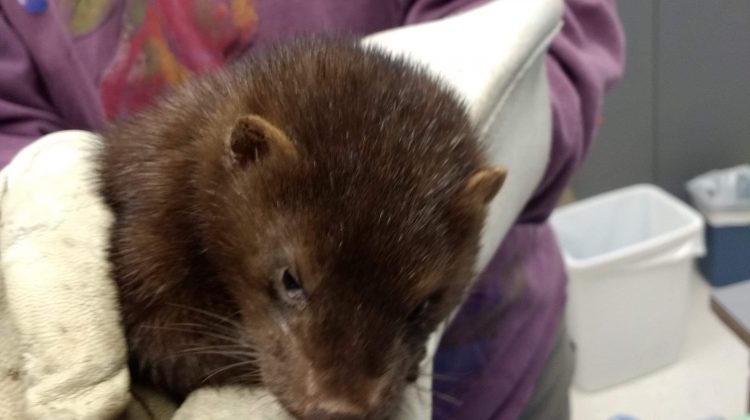 An injured mink spotted at the Anchor Inn parking lot had to be euthanized due to extensive injuries. Photo courtesy of MARS Wildlife Rescue Centre.

CAMPBELL RIVER, B.C. – A mink found at the Anchor Inn parking lot has been euthanized.

According to MARS Wildlife Rescue volunteer caregiver Jo Stiles, the mink suffered from extensive injuries consistent with being hit by a car. She said the injuries were so severe that the animal had no pain response on its injured leg and tail.

She said this was a sign of spinal cord injury as well.

“It had been observed dragging its leg for a couple of days in the parking lot. So we went and with the assistance of the maintenance staff and the employee who called us, we were able to get it,” Stiles said.

“It had a completely dislocated rear right leg, dislocated at the hip. There was massive nerve damage as well, so it was euthanized once we got back.”

Stiles added that the mink would not have been able to recover from its injuries, and that the only option was to put it down.

“It was a feisty little guy right up to the very end, and we were really sad to do it (put it down). But at least this way, he’s not in pain and out in the environment slowly starving to death or being preyed upon by something bigger.”

She said that at least they were able to provide a clean and safe death for the animal compared to how it would’ve died in the wild.

“We fix what we can, but some things we just can’t.”