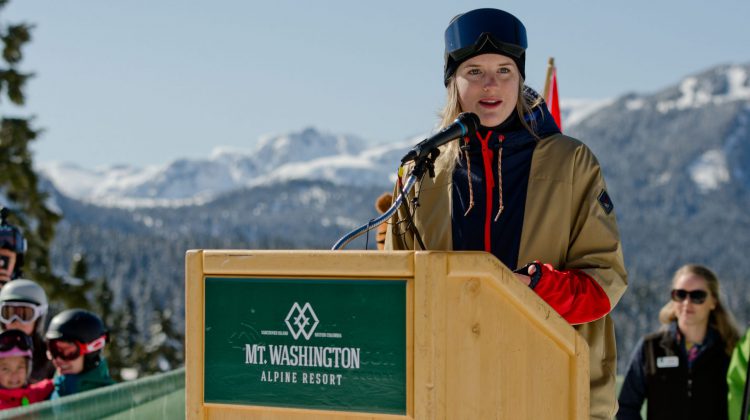 Cassie Sharpe spoke at Mount Washington last March after the alpine resort renamed one of its trails Cassie’s Gold in her honour. Vista Radio file photo

According to her Winter X bio, 2018 was a banner year for Sharpe, who captured her second XG medal in Aspen (bronze, SuperPipe), won Olympic gold in PyeongChang, and then clinched the Crystal Globe for halfpipe.

One of the highlights of winning Olympic gold for Sharpe was meeting Canada’s Prime Minister Justin Trudeau.

Athleticism runs in the Sharpe family.

Last March, one of Mount Washington’s alpine resort’s trails, Go for Gold, was renamed Cassie’s Gold in honour of Sharpe.

At the time, Sharpe said “It’s been really overwhelming in the best way possible, just having the love and the hugs and signing things for kids that are stoked on skiing and snowboarding, it’s just been really humbling.”

Sharpe bested the competition in Pyeongchang, posting a score of 95.80 in her second of three runs during the women’s freestyle ski halfpipe event to win gold.