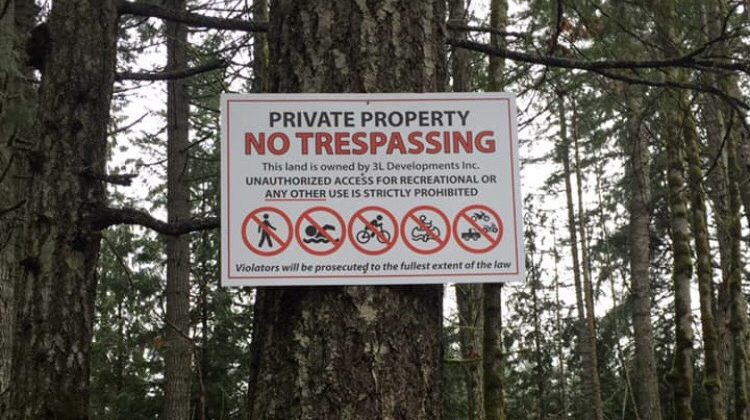 3L Developments said several of its signs have been taken from the company's land in the Stotan Falls area. Photo sourced from the Save the Puntledge Triangle Facebook page.

According to a social media post from a 3L spokesperson, the company has had several of its signs stolen from their land in the Stotan Falls area.

The notice stated that CrimeStoppers and/or 3L Developments would offer a reward for information about the missing signage.

The issue has been reported to the Comox Valley RCMP. Anyone with information can contact CrimeStoppers at 1-800-222-8477.

3L Developments Inc. is looking to develop lands located close to Stotan Falls, a popular swimming spot for locals and visitors along the Puntledge River.

Earlier this month, the company announced a closure of all the Riverwood lands near Courtenay.

Located near the Duncan Bay Main bridge crossing the Puntledge River and along parts of the river’s course, the Riverwood area contains the Stotan Falls.

Last October, the company filed a petition to the Supreme Court of British Columbia, asking for the Comox Valley Regional District’s (CVRD) denial of an application to amend the area’s Regional Growth Strategy (RGS) to be set aside.

The CVRD filed a response to that petition. It disagrees with every point raised by the company.

The next court appearance for the two parties is scheduled for March 12th to 15th in Vancouver.