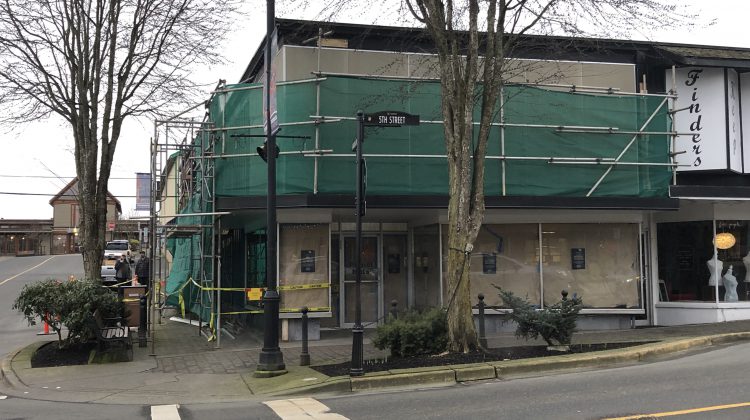 The exterior of the building, shown on January 28th, 2019. Photo by James Wood/98.9 The Goat/Vista Radio

COURTENAY, B.C- Scaffolds are up in Courtenay’s downtown core.

Residents of the Valley passing through the intersection of Duncan Avenue and 5th Street may have noticed a large scaffold and green netting going up over the former location of Planet Kids, a toy store that used to occupy the street level space at the southwest corner of the intersection.

According to the City of Courtenay, the current work at the site is a façade improvement, with HardiePanel, a type of siding, getting installed on the outside of the building.

The interior of the former toy store is empty, and the city government has not yet received an application for construction work or a business license at the site. Planet Kids has consolidated to their Comox location, with the change effective as of January 1st.

Further up the street, another façade improvement is getting done at the Masonic Temple building next to the vacant lot at England Avenue and 5th Street. The work there is more Hardie Panel, and the city indicated that it will have “dark slate cultured stone and grey metal shade” at street level.

The exterior of the building, shown on January 28th, 2019. Photo by James Wood/98.9 The Goat/Vista Radio

Apartments do not appear to be part of the work being done at either location.