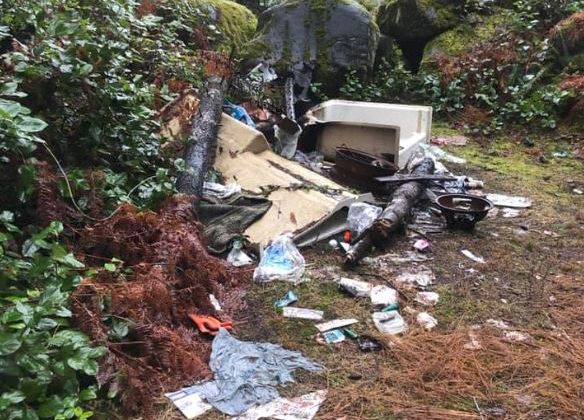 A photo of the garbage that piled up at Mary Lake. Facebool image

NORTH ISLAND, B.C. – A group of Campbell River nature enthusiasts pulled on their work gloves, pushed wheelbarrows, and lightened the human footprint at Mary Lake over the weekend.

On the Campbell River Rant, Rave, and Randomness page, organizer Jenny Doyle publicly thanked all those who spent their Sunday afternoon picking up garbage and shotgun shells at the lake, located about 20 minutes north of downtown Campbell River.

“Thank you to everyone who is a part of the solution, to those who are committed to leaving the wild places better than they found them for everyone to enjoy,” Doyle posted.

From noon to four in the afternoon on Jan. 27, volunteers collected two truckloads full of garbage.

“We brought as many containers as we could so we could separate (items), because a lot of it was metals with nails and shotgun shells and stuff like that,” Doyle said. “We separated as much as we could so that we recycle what we could recycle when we went to the depot.”

Doyle said tipping fees were waived so the group didn’t have to pay for any dump fees, “which was really nice.”

Mary Lake is popular with groups of young people who take part in skeet shooting and have bonfires, according to Doyle.

“It’s a beautiful spot, but it’s frequented by people who mistreat it,” she said. 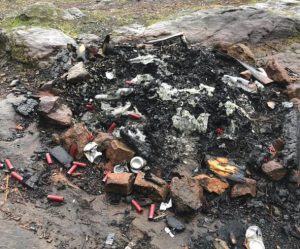 A photo of the garbage that piled up at Mary Lake.
Facebool image

The cleanup was community project put together by a group taking a Pursuit of Excellence course.

“I had recently been up the lake and seen how terrible a state it was in,” Doyle said. “So I suggested that we do that as our project and everybody was in agreeance.”

Eleven volunteers took part, including some who came from as far away as Nanaimo and Parksville.

Doyle had only been to the area a couple times beforehand, but noted that you can’t miss all the litter.

“As soon as you pull into the area, there was a roughed up, half-burned shower stall and all of this garbage right in the parking area, which is bad enough,” she added. “But then as you go towards the lake, there’s lots of broken glass, and there’s still lots of shotgun shells and skeet (discs) and stuff like that, so you certainly can’t miss it. It’s still not a place I would suggest you go with bare feet, or maybe even take your dog to be completely honest.”

It was such a positive experience, with volunteers enjoying roasted smokies, that Doyle could picture this becoming a reoccurring event.

“Clearly, there is an appetite for that in the city,” Doyle said. “There was so much positive feedback. A lot of people have come forward and said that they’d be interested in doing such a thing. I think that’d be fantastic.”

During the afternoon, three people who weren’t part of the cleanup thanked the volunteers for their efforts.

“They took the time to pick up garbage on their way out,” Doyle said. “So I think right away, it has this really positive feedback because people aren’t going to throw garbage on the ground when it’s clean.”