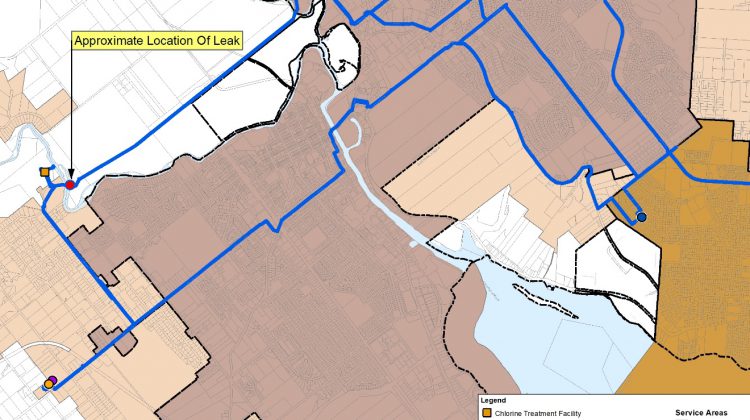 A map of the water system, showing the leak location. Image sourced from the CVRD.

COURTENAY, B.C- The drinking water system for the Comox Valley is leaking.

According to a report given to the Comox Valley Regional District water committee on Tuesday, a leak in one of two transmission lines that feed the Valley’s water system has been found under the east bank of the Puntledge River.

The line is a 900-millimetre steel pipe that runs directly under the chlorination station near the system’s intake point at the BC Hydro Penstock along Powerhouse Road.

Waterworks staff at the district noticed the potential leak in early December, and have been tracking it down since. Two small pinholes and a three-centimetre hole in the concrete-encased potion of the pipe have been found. The leak is estimated to be large in size, between 12 to 15 litres per second.

Provincial authourities have been notified, as well as the federal environmental ministry and the fisheries ministry.

“During the repair or, in the event of a catastrophic failure of the 900 mm line, the CVWS would be forced to rely entirely on the single, smaller line to supply water to the majority of the CVWS (approximately 25,000 people) in East Courtenay and Comox, resulting in a complete loss of redundancy until a repair is completed, significantly increasing the possibility of a loss of water supply to that part of the system in the event of a critical main break,” read the district report on the leak.

The leak was isolated on January 16th, forcing the water to the smaller alternate line to the east half of the water system. Water now has to travel a longer distance before it hits the leak, which reduces the pressure and volume of water passing by.

With the drop in pressure and volume, there is less water and chlorine leaking from the larger line.

“This operational change resulted in a number of dirty water complaints within the Town of Comox and City of Courtenay,” read the report.

“Since that time the CVRD have developed a more effective procedure for notifying the Town of Comox and the City of Courtenay of major operational changes within the system that may generate concerns/complaints from residents.”

If the CVRD is forced to rely on the alternate line during the dry months, which usually begin in May, stage four water restrictions will be required in order to meet water demand and fire flows.

Given that challenge, the district is aiming to fix the leak by the end of April.

They’re also aiming to keep the ability to switch flows back to the leaking line, if there is a break in the alternate route, and set up a repair process that will get the main line fixed as soon as possible.

“Due to the potential significant impact of the leak and the necessity to repair the leak as soon as possible, the CVRD is operating under the emergency services purchasing provision within the purchasing bylaw to retain the required services necessary to complete the repair in the very tight timeline required,” read the report.

Out of five solutions offered by local engineering firms, McElhanney Consulting has been chosen to complete the engineering for the repairs based on their level of experience with similar works and strong commitment to schedule.

The total funding set aside for the repair is $500,000, which will be included as a new capital project for the district’s water system budget.

CVRD board chair Bob Wells didn’t think the leak should cause any major concern.

“Having said that, it’s getting fixed as soon as possible, so it doesn’t have any kind of effect,” said Wells.

As for whether or not it would have been better to notify the public about the leak sooner, Wells said it was obvious that sooner was better.

“I think staff are working on a better communications plan,” said Wells.

“I think that’s one of the things that most of the folks that got elected in this last election really talked about, was that openness and transparency. But sometimes, you know, staff are working so hard to fix the problem, being able to communicate while you’re trying to fix the problem is sort of like rubbing your belly and patting your head, it can be complex sometimes.”

The water committee will be given updates on the repair at every one of their meetings until the leak is fixed.