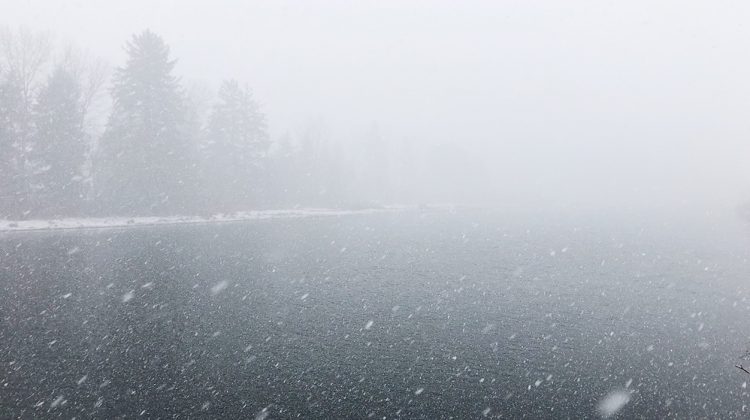 The mouth of the Courtenay River is obscured by blowing snow on February 10th, 2019. Photo by James Wood/98.9 the Goat/Vista Radio

The forecast calls for 10 to 20 centimetres of snow to fall on the area tonight, and into tomorrow afternoon.

This is on top of the roughly eight to 12 centimetres that has already fallen on the Comox Valley and Campbell River over the past 24 hours.

Hartt explained what is causing the foul winter weather.

“In this case, we’ve had this cold arctic ridge sitting over mainland British Columbia,” she said. “And then some Pacific systems have been tracking down the (B.C.) coast and those are bringing moisture. And then combined with the cold arctic air, that’s what’s causing these snow events.”

The clouds will part tomorrow afternoon, making way for sunshine through to Wednesday.

But after that, another low pressure system is on its way, with the possibility of more snow on Thursday and Friday.

Meanwhile, the temperatures will rise slightly to the low single digit range by the end of the week, but no where near the normal of seven degrees Celsius at this time of year.

“What this could mean is there could be some mixed precipitation,” Hartt said. “By that I mean, it could be snow changing to rain or mixing with rain, so that could be less snowfall amounts, but it could mean some bad conditions for driving.”

Looking past this week, those waiting for the conditions to moderate will have to wait a while longer.

The cold weather is expected to hold until the end of February.