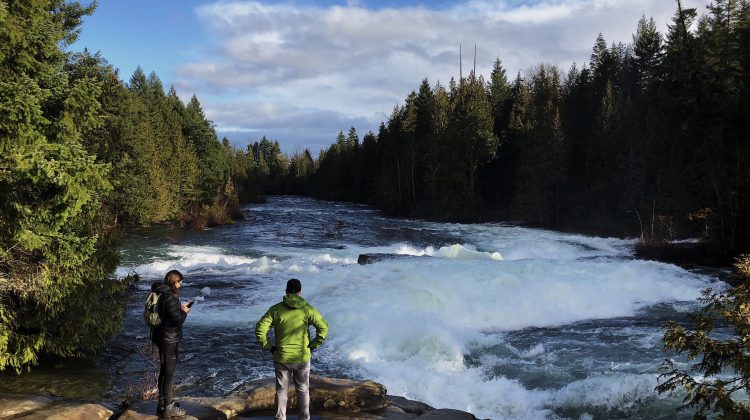 COURTENAY, B.C- Nymph Falls won’t be getting a gazebo.

Late in January, the Comox Valley Regional District announced that the trail down to the falls was getting widened at Nymph Falls Park to act as an emergency route, and to be more accessible for people with mobility issues.

The path was set to be widened to 3.5 metres in width, with a gazebo at the end and an accessible toilet. 17 fir trees and 20 cedar trees were going to be felled as part of the clearing work.

However, outcry from Valley residents opposed to the changes has put a stop to the gazebo.

“We have made a decision to cancel the gazebo at the end of the trail,” read a message from Doug DeMarzo, the district’s Manager of Parks, posted by Valley resident Helen Pattinson to the Nymph Falls Protection Collective Facebook page.

“Thank you for expressing your concerns and helping to organize the discussion on Monday with concerned residents. We will still require a defined end point to the accessible trail and believe this can be completed with the same gravel surfacing as the trail and either fencing or natural rocks as suggested by some of the group comments on Monday.”

Messages from Pattinson posted to the group indicated concerns about the work being done at the park, with the possibility of more visitors coming, more garbage, an increase in fire risk during fire season, attraction of vandalism to the area, and more stresses to the already-busy area.

There have also been messages posted to the page about the number of trees being cut down exceeding the previously-stated amount from the district.

The MyComoxValleyNow.com newsroom has reached out to Pattinson for comment on the matter, and have not yet heard back. However, DeMarzo was reached on Wednesday afternoon.

According to DeMarzo, there will not be as much of a structure at the end of the trail, but there will still be barriers.

“We’re not sure what it’s going to look like now,” said DeMarzo.

“We have to go back to the drawing board, to determine how we’re going to end an accessible trail to ensure that it’s safe for users.”

There will still be a lookout at the end, according to DeMarzo, but it will be more natural in design.

Asked if the CVRD board of directors needed to be involved in any of those decisions, DeMarzo said he thought it was an operational change that could be made.

“I hope so, because we made it,” said DeMarzo.

As for the question of more trees being felled, DeMarzo said it was “difficult to say”.

“Essentially, we looked at 37 trees in the corridor were planned to be felled,” said DeMarzo.

“Many of them were quite small, but there is also WCB (WorkSafeBC), when the contractor is working, (they) has to provide a safe worksite, a few more may have been felled to provide that safe worksite. We don’t have a total count. It wouldn’t have been excessive.”

He also stated that the district would not be looking into the matter.

“We walked the corridor, and marked the trees prior to falling. We’re comfortable with what’s happened out there.”

Even if more trees were felled than marked, DeMarzo believed they would have been small, part of the understory, and most likely “hazard trees”.

“It would have been just sort of the next step,” said DeMarzo.

He stated that there were also no plans for a new changeroom near the falls, after mentioning that had come up as some of the concerns in response to the work at the park.

Instead, there was a rough plan to re-use the outhouse near the falls as a changeroom space, which has now been scrapped. The structure will be removed, and put somewhere else in the trail system.

“At the end of the day, no gazebo,” said DeMarzo.