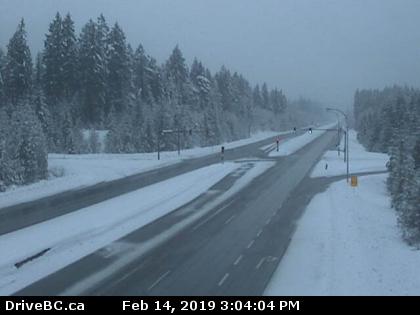 A weather system expected to drop five to ten centimetres of snow along the South Coast is making its way up our region.

The snow is expected to become heavier late this afternoon as a more organized band of precipitation moves up from the south.

The majority of the snow is expected overnight, though there is potential for it to be fairly heavy.

This storm will be accompanied by slightly milder conditions and the snow is expected to be wetter (less fluffy) than earlier this week, according to Environment Canada.

Drivers should prepare for quickly changing and deteriorating travel conditions. Rapidly accumulating snow could make travel difficult over some locations.

According to the DriveBC cameras over Highway 19, snowfall is currently strong in the Cook Creek area.