Forecast calls for wet snow to fall on North Island on Friday, Saturday 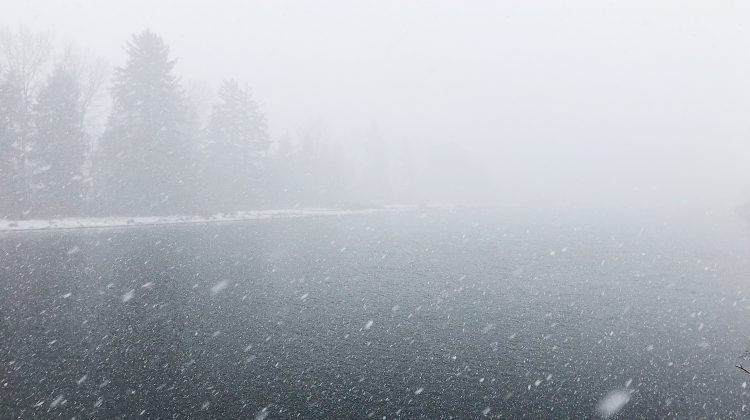 The mouth of the Courtenay River is obscured by blowing snow on February 10th, 2019. Photo by James Wood/98.9 the Goat/Vista Radio

NORTHERN VANCOUVER ISLAND – Depending on elevation, heavy weather is on its way to Northern Vancouver Island and Powell River.

Environment Canada meteorologist Matt MacDonald said another system will hit the region late tonight and will then “slide down the island.”

The forecast calls for wet snow to start falling early tomorrow morning and continue until the afternoon.

“With temperatures always hovering around freezing, we’re going to see some snow mixing in with that rain, so it’ll probably be rain down near the water, but as you move just a little bit inland including Highway 19, we could see anywhere from four to six centimetres by midday Friday,” MacDonald said.

Powell River could possibly see some accumulations in the five to eight centimetre range.

“It’s a little colder on that side of the (Georgia) Strait,” MacDonald said.

Campbell River could be impacted, as well, with five to 10 centimetres of the white stuff hitting the city on Friday.

The snow should end by Friday afternoon, according to MacDonald.

However, another disturbance is expected to push into the region on Saturday, bringing with it another mixed bag of rain and snow.

“It could be a little bit messy on the roads there on Saturday morning,” MacDonald predicted.

MacDonald said this is a tricky forecast where, as precipitation intensity picks up, rain will turn to snow: “Be prepared for wet snow and definitely some accumulations away from the water, especially on Friday and Saturday.”

Port Hardy tends to be more exposed to wide Pacific Ocean waters, so it will be a little milder with less precipitation, and that will be again the case over the next two days, according to MacDonald.

“Not much snow expected for them,” MacDonald said.

And along with the snow, comes an extended deep freeze that has sat on B.C. throughout the entire month of February.

The average temperature across the entire Northern Vancouver Island has been a full four degrees Celsius below normal over the past three weeks.

Thus far, it’s been the third coldest February ever in the Comox Valley, with records dating back to 1915.

And there’s no end in sight.

“I can say with confidence that the temperatures aren’t really moving,” MacDonald said. “We’re going to continue with these temperatures below seasonal normal until the end of February and probably into the first week of March, as well.”

On a bright note, there is an extended sunny weather coming, starting on Sunday.