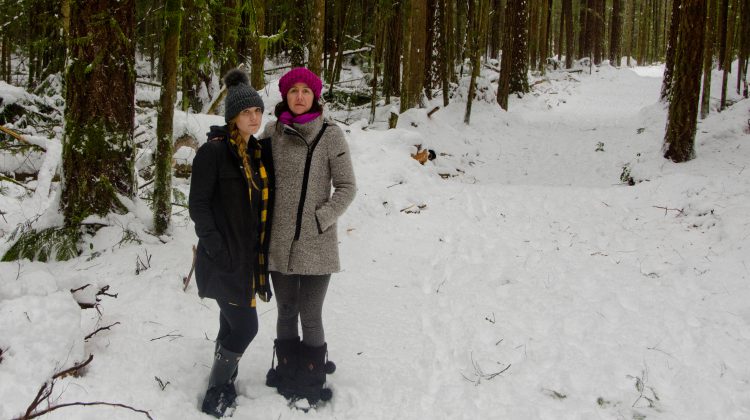 Sheena Stone and Helen Pattinson are pictured along the newly-cut trail in Nymph Falls Park on February 15th, 2019. Photo by James Wood/98.9 The Goat/Vista Radio

COURTENAY, B.C- Not enough care was taken for a major project at Nymph Falls.

That’s according to members of the Nymph Falls Protection Collective, who have been bringing their concerns to the Comox Valley Regional District in recent weeks.

The collective has membership from across the Valley, and had a recent spike in activity due to anger at the district’s handling of an access road project from the area’s current parking lot down to the falls.

Late in January, the Comox Valley Regional District announced that the trail down to the falls was getting widened at Nymph Falls Park to act as an emergency route, and to be more accessible for people with mobility issues.

The path was set to be widened to 3.5 metres in width, with a gazebo at the end and an accessible toilet. 17 fir trees and 20 cedar trees were going to be felled as part of the clearing work.

However, outcry from Valley residents opposed to the changes put a stop to the gazebo.

Following the cancellation, the MyComoxValleyNow.com newsroom spoke with two members of the group at the park, while walking through the cut area down to the falls and back again last Friday.

Both Helen Pattinson and Sheena Stone, who live along Forbidden Plateau Road, described their primary concerns as a “lack of care”, taken with the project and how it was communicated to the public.

Pattinson described what she saw at the park as a doubling in scope from what was originally laid out by the district, due to 70 trees being chopped down and a wider road than previously stated.

Stone had the same concern.

When asked earlier about more trees being felled than previously communicated, the district’s parks manager Doug DeMarzo said it was “difficult to say”. 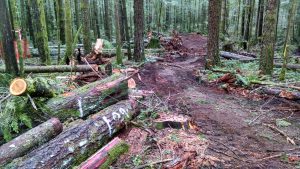 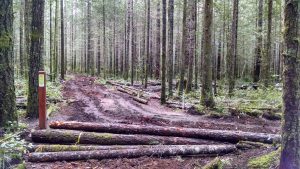 “Essentially, we looked at 37 trees in the corridor were planned to be felled,” said DeMarzo.

“Many of them were quite small, but there is also WCB (WorkSafeBC), when the contractor is working, (they) has to provide a safe worksite, a few more may have been felled to provide that safe worksite. We don’t have a total count. It wouldn’t have been excessive.”

He also stated that the district would not be looking into the matter.

“My main concern is not jumping off the gazebo,” said Stone, referring to the now-cancelled plan that was originally laid out by the district.

“My main concern is the process that has apparently been undergone, and the safety. Of course, safety in construction is very important, that sort of thing, there needs to be a process in place where that is reported and communicated, and then you double your scope. That doesn’t suffice, as an excuse. I’d like to actually see something credible, that could explain why that wasn’t properly communicated to the public.”

Pattinson described the cancellation of the gazebo as a big victory for the community, but was uneasy about what will go in its place.

“The language is very grey, and that makes me uneasy,” said Pattinson.

“There’s no clarity. There was some mention about perhaps some fencing, perhaps some rocks, and there will still be some lookout, of some sort, so that’s what many of us are concerned about, what does that look like, and we’re asking for community involvement in that decision making.”

Stone was also concerned about the district’s trail expansion bringing more people to the park, which already has a high amount of traffic throughout the year.

“There are parties that happen down at Nymph Falls, that are like literally over a hundred people, big booze, big party, big danger to risk of life, and who is going to monitor that?” said Stone.

“Who is going to monitor the risk of fire, when there are houses that back straight onto this forest?”

Both hoped that follow up to the community concern over the project would allow for more input from the community and address multiple concerns over the park’s management and direction, along with the possible environmental impacts on the park from the project.

Pattinson cited the recent negative effects to the Cowichan River, which was reported to be dying from too much sunscreen being left in the river by visiting tubers.

“We need to learn from these other projects, that are just in our neighbourhood down the road, and I don’t have an answer, of how we can solve this, but there needs to be some environmentalist who can actually monitor what the possible risks are to the whole ecosystem,” said Pattinson.

The MyComoxValleyNow.com newsroom reached out to the district with a detailed list of questions about the Nymph Falls project.

Asked about the exact consultation process with the community about the work, including timelines of meetings and the planning process, the district stated that a number of routes were considered in consultation with the Forbidden Plateau Road Residents association in 2017.

The district said that in March of 2018, DeMarzo attended the annual meeting of the Forbidden Plateau Residents Association to discuss the trail. An on-site meeting was held in the park, with the public being notified on the CVRD website, notices in the park, notices on mailboxes, and invites circulated through the resident’s association.

This past July, an environmental assessment was undertaken by the Baynes Sound Environmental and Youth Ecological Restoration, which included a public tour by the environmental team. According to the district, that tour was advertised in the local paper, social media, and posters in the park.

In August, the district’s Park Technician met with the Comox Valley Accessibility Committee to review plans for an accessible trail to the falls, along with another meeting that involved two members of the resident’s association for the accessible trail.

In October, parks staff walked through the park with two members of the Strathcona Sunrise Rotary Club, who were providing a financial contribution to the gazebo.

In November, the project web page was published on the CVRD website, with a new brochure to include a notice of the proposed accessible trail on the brochure map. An evening meeting at the CVRD boardroom was held the same month, for “interested park users and residents” in order to outline a proposal for the trail.

Notices for that meeting were posted at the park, and distributed to residents through the resident’s association.

Asked about the ultimate goal of the route to the falls, the district said the project was “twofold” with one being the pumping out of the existing, outdated toilet facility, requiring truck access for the first portion of the trail.

The remainder of the trail was meant to provide high accessibility to the falls.

Asked about where the wood being cut for the route was going, the district said the trees in the park are under the authourity of the provincial forest ministry. Ministry staff decided on February 7th to sell the cut trees to a local firewood company, with the cut trees being removed from the park as a result.

“We support this solution as it reduces combustible fuels on the ground that nearby residents also consider a fire risk,” read the response from the district.

Asked about why the trees being cut didn’t match the amount previously described by the district, the response stated that they had no confirmation on the total amount of trees cut under 30 centimetres.

“Our initial counts were 37 but the contractor can remove other trees in alignment with WCB (Worksafe) requirements,” read the response.

“Only 20 trees over 30cm dbh (diameter at breast height) were removed. The majority of the remainder were small understory trees.”

What happens at the end of the trail still is up in the air, after the cancellation of the gazebo.

“Parks staff will be meeting with the Comox Valley Accessibility Committee to discuss other ideas and updates will be provided to the public on the CVRD website.”

Work is still underway at the site. Asked if residents will be able to provide more input on the rest of the process, given their heightened concerns, the district suggested contacting Parks staff.

As for the concern about lack of care in how the project was communicated and carried out, the district said they consider public input valuable with every project, and communication with residents will be improved moving forward.

“Outreach activities were available and we’re currently evaluating how we can improve advising residents of these opportunities,” read the response.

The MyComoxValleyNow.com newsroom also spoke with CVRD board chair Bob Wells, who said that staff are considering “scrubbing” the viewing platform, given the feedback to the idea.

He also touched on the communication about the project to the public.

“One of the lessons learned is in some of these parks, even though the communication is out there to the people, that we think are most interested in, obviously when you look at a park like this where a lot of the feedback that we got afterwards once the work had begun were from people from across the Valley, not just that local area,” said Wells.

“So, I think that was a good lesson learned.”

Both Pattinson and Stone planned on bringing a delegation to the CVRD board about the project in future.