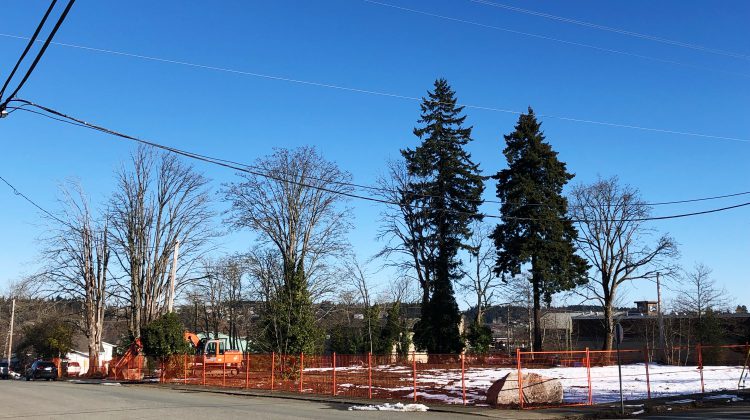 The site behind the west Courtenay Thriftys is pictured on February 27th, 2019. Photo by James Wood/98.9 The Goat/Vista Radio

COURTENAY, B.C. – If it gets the green light from the city, a sizable housing development will take shape on the land behind Thrifty Foods in west Courtenay.

Shawn Vincent, project manager with the joint venture that involves Simba Investments and Lotus Yonna, explained what is proposed for the land.

“And there will be a second phase will be a rental building. We’re hoping to get 40 units in there.”

The townhouses are going to line the outside of the property at 14th Street and England Avenue, with the rental building tucked in behind.

“You’ll barely see it from the road,” Vincent said.

Once they’re completely built, there will be 56 units available at the site, according to Vincent.

He noted that the rental building will provide more affordable housing in the Comox Valley: “We’re trying to do our part to solve some of this the affordable housing problem. We’ve got a mixture of units in the rental building that we’re proposing. We’ve got one and two bedrooms as well as ‘micros’ which really helps that entry level of accommodation in the Comox Valley.”

Vincent said the developer has three projects planned, each of which will include micro units.

“So what that does is it helps reduce the monthly cost for people who want good, clean, safe accommodation,” he added.

He estimated that about a third of the rental building proposed behind Thrifty Foods will consist of micro units.

“It’s a good site, but we have to be respectful of our neighbours,” Vincent said. “We looked at several different options but we think this is a really good mix for the neighbourhood.”

Vincent said that it’s too early to tell exactly what the rental rates will be.

“We know what our land cost, we know what our general building cost is, but we have to go right through to the end with the servicing of the property and everything else to find out what the costs are going to be,” he said.

But the one step the developer can make, is to address the affordability issue through the size of units “and a good use of space.”

He noted that cities such as Nanaimo are pushing towards building developments that include smaller units to make housing more affordable in B.C.

“I think a lot of times we get used to what we live in and we don’t think about what people who are coming into the marketplace actually need, which again is that clean, safe, new space, that is close to services,” he said.

According to Vincent, construction costs for both phases combined are in the $12 million to $15 million range.

The proposal is expected to come before council on March 18.

The next step is a closure of an old lane that ran through the property and is owned of the city. The developer will purchase that lane and consolidate all of the lots that are on the site.

“Once the road closure is done we should be ready to go,” Vincent said. “I think our end of the things for the city has been complete for a little bit so we’ve just been waiting for the road closure and then we’ll be away to the races.”

“We think about people being able to live there and walk to restaurants, and pubs, and doctors’ offices, and the coffee shops and the grocery store… it’s a good location.”