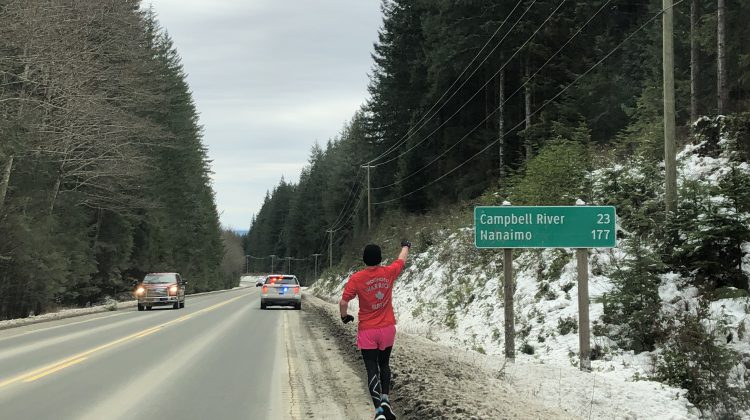 The sixth annual Wounded Warriors run, which raises funds and awareness for first responders and military veterans struggling with post-traumatic stress, is heading through Campbell River and the Comox Valley today.

B.C. run director Jacqueline Zweng spoke about why seven runners are pounding 600 kilometres of pavement from Port Hardy to Victoria.

“We want to normalize the conversation about mental health, and we want our people who wear a uniform every day to know that they can say something when they’re struggling, and that’s a sign of strength, not a sign of weakness,” Zweng said, during a pit stop at a Campbell River coffee shop this morning.

“We’re trying to give people hope, and a solution for their operational stress injuries.” 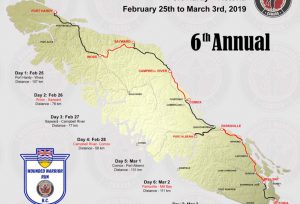 After roughly 318 kilometres, the run has already been an emotional experience.

“The north end of the Island is a very, very special place.”

The team started their journey on Monday from the shores of Port Hardy, where they were blessed by Kwakwaka’wakw totem pole artist Calvin Hunt before they left Carrot Park.

Zweng said that every step of the way, the team has received a warm reception.

“Port McNeill, Woss, Sayward… the absolutely most beautiful people who are just so connected and loving and willing to stand up with us and agree on the mission to help people and help communities,” Zweng said.

The team passed through Campbell River this morning en route to the Comox Valley.

They leave the Comox Valley tomorrow morning, heading south to Port Alberni for the first time in the run’s history.

The run has local connections.

Team members include Aggie Pringle, a paramedic who lives in Sayward, and paramedic Jackie Cummings, who used to live in the Comox Valley.

Online donations can be sent by clicking here. You can also track the run at www.inthistogether.run to see where the team is at any given time.