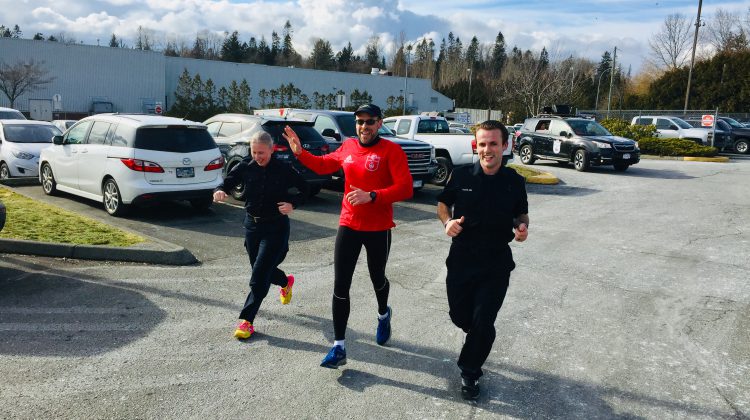 Comox resident Ian Heselgrave (red sweater) was flanked by Samson Haire and Lori Timpson as they ran into the parking lot of the Comox Valley RCMP detachment on Thursday afternoon. Photo by Troy Landreville/98.9 The Goat/Vista Radio

COMOX VALLEY, B.C. – As soon as he heard that the Wounded Warriors run was making its way along the North Island, Ian Heselgrave knew he wanted get involved.

The Comox resident ran with the team during its Comox Valley leg of the run, which raises funds and awareness for first responders and military veterans struggling with post-traumatic stress.

“I’m a veteran myself and a runner and I knew it was coming through, so I got in touch with the organizers and asked if I could join them for a leg or two to provide some support to those seven runners who are going the long distance,” Heselgrave told the MyComoxValleyNow.com newsroom this afternoon, during the team’s stop at the Comox Valley RCMP detachment.

“They welcomed me in with open arms. So it’s pretty moving. It’s a great experience.”

He joined the run on the south edge of Merville and ran to the RCMP detachment. After a short rest, he agreed to join the run to 19 Wing Comox.

Heselgrave, who served in the Canadian Air Force as a navigator, said the cause is very important to him.

“It (PTSD) can be pretty silent suffering for some and I think awareness of the issues that some veterans face , and bringing that out in the forefront is super important,” he said. “It’s great.” 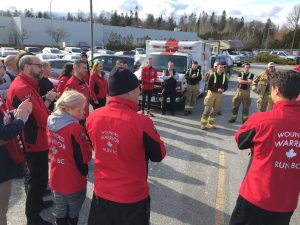 Those involved in the Wounded Warriors run visited the Comox Valley RCMP detachments this afternoon.
Photo by Troy Landreville/98.9 The Goat/Vista Radio

While he never suffered from PTSD, Heselgrave said he has lots of colleagues and friends who have, and “it can affect anyone at anytime.”

Courtenay Mayor Bob Wells welcomed the team to the detachment.

“Anytime we can take the opportunity to raise awareness and raise funds… for those who have put their lives in harm’s way to protect us and to provide the freedom that we have in Canada, we need to take that opportunity and celebrate (them),” Wells said.

Online donations can be sent by clicking here.

You can also track the run at www.inthistogether.run to see where the team is at any given time.