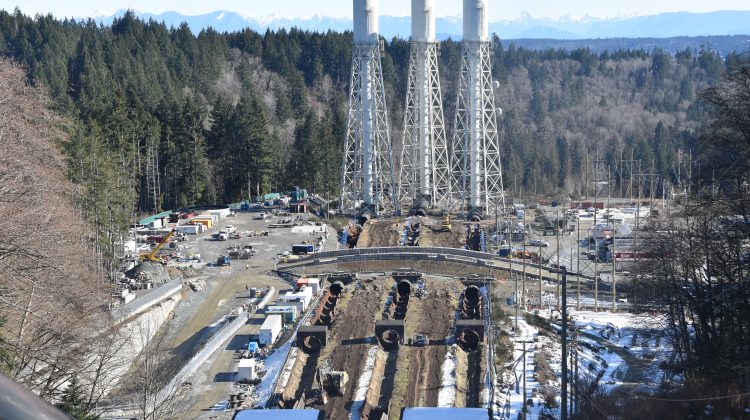 A February 26 photo of the steel penstocks being removed upstream of the large white surge towers. Photo courtesy BC Hydro

Starting April 1 to potentially August, walkers and runners will no longer be able to complete the full Canyon View Trail loop.

The section of trail that goes past the three penstocks and John Hart surge towers will be closed off as work advances in removing the old above ground hydroelectric facility.

People can continue to walk the trail up or down either side of the Campbell River.

“The temporary trail called the Station View Trail, which opened in 2013 and re-routed the Canyon View Trail over the penstocks on a temporary wooden bridge, will be closed off for public safety.”

The trail across this area may then be temporarily re-opened until permanently closed off when the trail through BC Hydro’s property is re-routed back near the river.

The Canyon View Trail was in place along the river until 2014 when it was closed off for construction of the John Hart Generating Station Replacement Project. Hydro says it is following through on its commitment in putting the trail back near the river. The re-established trail may open around the end of the summer.

“We’ll see how the work progresses on the removal of the old hydroelectric facility, though we see it being closed to July and potentially into August,” said Watson.

“As to putting the trail back near the river, we first need to have the old generating station removed down to ground level, then set up the trail through that area within a fenced corridor to the foot of the hill where some stairs will be installed. From there, the trail will go up the slope and then cut across above the new tunnel outlet area and join into the existing Canyon View Trail.”

BC Hydro is also looking at restoring public river access where Destiny River Adventures, with their commercial river rafts, enters the river. That public access may be re-established by early fall 2019. Originally, people could enter the river near the entrance to the canyon, off a rock outcrop, just upstream of the old powerhouse.

“We were very fortunate with the project design that we had very few trail closures impacting the Canyon View Trail during project construction from 2014 to now,” adds Watson.  “For this work, there is no way around the closure. We appreciate people’s patience and understanding. The end trail product and interpretive value will be worth the wait.”

Signage with the trail closure dates will be posted along the trail system.

BC Hydro went over the trail and river access topics around the John Hart site at its community liaison committee meeting held February 27. About two-dozen stakeholders sit on the committee.