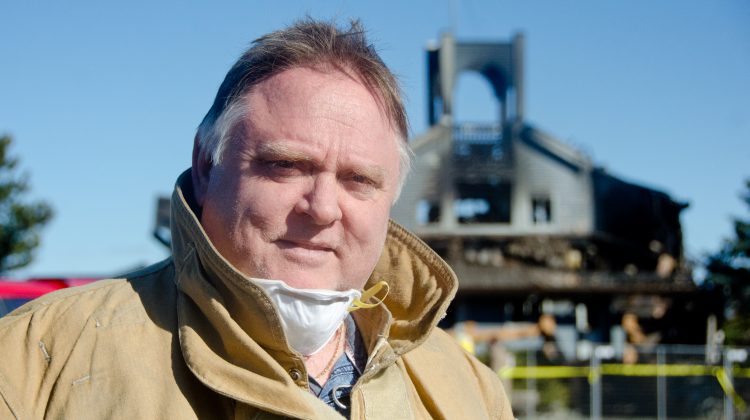 Jim Flohr is pictured outside the damaged Salmon Point restaurant on March 4th, 2019. Photo by James Wood/98.9 The Goat/Vista Radio

Reached on Monday afternoon, Flohr was still processing what had happened to his business.

A member of the Oyster River fire department, he was present on Friday while the restaurant burned, though he was not an active participant in the call.

Firefighters had gotten the call around 4:45 a.m. about sirens ringing at the popular restaurant.

Once the deputy chief arrived on scene, he reported that the building was fully involved, and photos of the incident show the building engulfed in flame throughout the early morning.

Firefighters took a defensive stance from the time they arrived, due to the state of the blaze.

The cause remains unknown.

Flohr said that everything had been lost, with employees displaced. He estimated between 16 to 20 people were now looking for work.

“The community has been great,” said Flohr.

“I’ve been getting calls and emails from a whole bunch of different pubs, they’re prepared to help with the staff. All they need to do is go in and say they’re from Salmon Point, with a resume, and good chance is they’ll get a job.”

He said there was no chance of salvaging the damaged building, and believed it will be knocked down.

As for what will go in its place, he wasn’t sure yet.

“Everybody’s started talking, and we know nothing,” said Flohr.

“My hope is lots of things. Right now, just to get through this first.”

As for what he personally is feeling, he said it wasn’t good.

“That was our home, it was Salmon Point. It was where we went to work every day, six days a week.”

However, he said the response from the community to him has been great, with the help offered to staff and best wishes. He’s still waiting on the word from investigations and about fire insurance.

“Everything is a step, and we see what happens.”

There were no injuries reported from the fire.