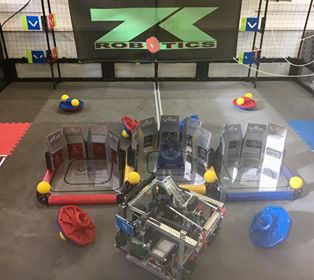 COMOX VALLEY, B.C. – A pair of Comox Valley schools robotics teams are Kentucky bound after impressive showings at the VEX Robotics Provincials in Delta on March 2.

NIDES 7842F and 7K were among 40 teams that competed at the provincial tournament, a qualifier for the world competition that takes place in Louisville, Ky., from April 24 to 27.

And both valley teams qualified for the worlds (to visit the 2019 VEX Robotics World Championships, click here).

This is the third consecutive year for a team from NIDES to compete at the world level, in the seven years the program has been operating.

“I’m  really looking forward to another visit to the VEX World Championship. British Columbia has always set a very high competitive standard in robotics that we take with us to Kentucky,” said NIDES team member Jacob Walter.

For 7K, a new independent team comprised of secondary students from Mark R. Isfeld, this is their first appearance.

“We are very proud to have won a spot at worlds with our valley partner team, 7K,” said Steward Savard, coach for the NIDES teams.

“Advancing on is clear evidence of what students in the Comox Valley can achieve in the fields related to robotics and programming.”

According to Appaix, 7K will be in Iowa from April 2 to 7 to compete against 240 teams at the US Open, and then they will be headed to Kentucky for the worlds.

Appaix elaborated on what the teams do at these competitions.

“We built robots out of specified parts and then we go and compete every couple weeks,” he said. “Then we go from local competitions to provincials.”

He said the 7K team members have been building their particular robot for a month-and-a-half.

Appaix said 7K is thrilled about the prospect of testing their skills at the worlds.

“It’s so exciting because at the beginning of the year it was unimaginable,” he said.

“That was the final goal.”

This year, 18 teams from the school district competed in VEX tournaments – 12 from NIDES (includes four teams based in Nanaimo), five from Mark. R. Isfeld and the independent team – all vying for the chance to advance by competing at the regional and provincial levels.

Five Comox Valley NIDES teams advanced to the provincials along with 7K. The Isfeld Ice teams performed very strongly with one team missing by a small margin to advance.