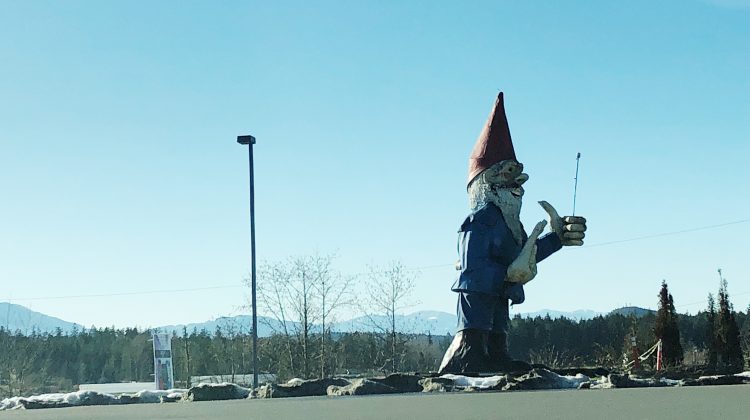 NANOOSE BAY, B.C. – A GoFundMe page has been started for Howard, the world’s tallest gnome.

The 25-foot tall statue has been a fixture at the Nanoose Bay Chevron station at the Chevron Station at 1660 Island Highway for years, and now Bridget Matewish, whose grandfather Ron Hale built Howard, is hoping to find a place in a public setting where he can be preserved and appreciated.

According to the GoFundMe page, the goal is to send Howard to his new home in the best repair.

“The money will be used to purchase him a brand new trailer to replace the rotten base he is currently on, completely repaint him, as well as repair his plaster hands and foam face. Any remaining money will be donated to the Parksville SOS to support those most vulnerable,” the page notes.

The Hales, who created the GoFundMe page on Wednesday, said Ron Hale build Howard in his garage, using scraps of garbage and junk we had laying around our property.

He originally stood as the family’s amusement park mascot, and when that era ended, he became the station mascot.

The Hale family sold the station many years ago but, according to the page, “the gnome still stood, unfortunately the owners let him go, allowed him to disintegrate and now they are tearing him down.”

It continues, “We want to find him a new home, somewhere people can still visit him, take photos with him and for Bruce and Ron Hale to live on through him. We don’t want to see him torn down and thrown out.”

Link to the GoFundMe page here.