Renos, upgrades in works for Filberg Lodge and Park 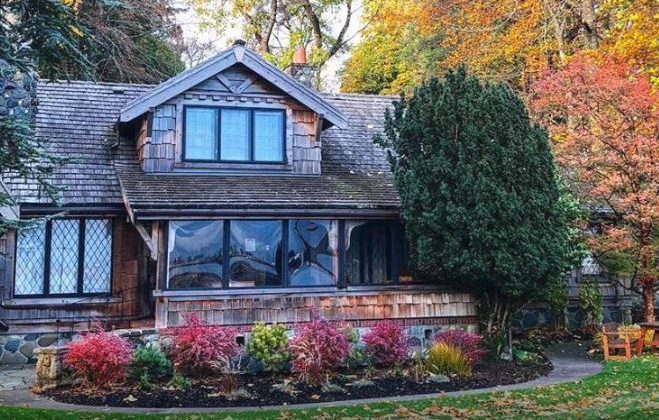 COMOX, B.C. – The Filberg Heritage Lodge and Park is in need of a spit and polish.

“Our vision is a world-class heritage park for all to enjoy, and think that says what we’re all about,” association member Audrey Craig told council members. “We’re dedicated to the preservation and stewardship of the Filberg Lodge and Park.”

As it celebrates its 40th year, the association “has set some pretty firm strategic objectives,” Craig added.

Among the future plans: upgrading the plumbing in the lodge, restoring the driveway, repairing and/or replacing some of the rock walls around the park, and replacing the deteriorating arbour in front of the summer kitchen.

“We knew we had to replace it (the arbour),” association member Tom Blackburn told council members. “But we had some help with some feathered friends in the fall.”

Damage from woodpeckers illustrates how deteriorated the logs and some of the support structures have become, Blackburn said.

The grape arbour also needs attention, according to Blackburn. “It served us very well but it needs to be replaced. Some of the issues that happened with replacing log structures, is not the logs that are in the structure, it’s also the footings. What are we going to do with the rock footings, and we’re going to have to look at that.”

The park also includes 18 buildings, most constructed from shake and shingles, and 100 species of trees from around the world.

“For the most part, the buildings in the park are in good shape, however, there are a few that need to be repaired,” Blackburn said. “One thing we’re finding is it’s becoming increasingly more difficult to find people with skill sets who can deal with log structures, and repair log structures.”

Blackburn said the “important number” is the $60,000 the association has to fund raise.

About Filberg Lodge and Park

Upon property owner Bob Filberg’s death, he bequeathed his nine acre property and the Lodge, along with $11 million, to the Vancouver Community Foundation.

Not wanting to see the property developed into housing, the Town of Comox petitioned the foundation to purchase the property.

In 1979, the Lodge became the property of the Town of Comox, and it later became a Municipal Heritage site.

The park encompasses nine acres and is visited by thousands every year.

“It really has become the heritage jewel of the Town of Comox,” Craig said.