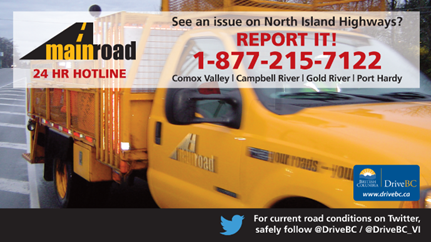 CUMBERLAND, B.C- Drivers travelling along Vancouver Island should be careful on highway bridges for the next two months.

According to a notice from Mainroad North Island, the company’s bridge crew will be doing bridge sweeping and washing operations from 8 a.m. to 5 p.m., Monday to Friday, until mid-June.

The company’s bridge crew for the Mid-Island will be doing the same operations from 8 a.m. to 5 p.m., Monday to Friday, until May 31st of this year.

The Mid-Island arm of the company handles highway clearing from roughly Bowser to Chemainus, and the North Island arm runs from Cook Creek to Port Hardy.

Drivers heading through those areas should be watchful for any roadside workers on bridges while the work is ongoing.

Dwayne Randall, the Bridge Supervisor for Mainroad North Island, said that that crews will likely start on the Cook Creek bridge late next week, and work their way further north.

An exact list of times and locations is not available, but notices of work will be placed on DriveBC as crews make their way up the highway system.

If anyone sees a road concern, hazard, or debris, they can report it to the company at 1-877-215-7122. They ask to please be as descriptive as you can for the hazard’s location.