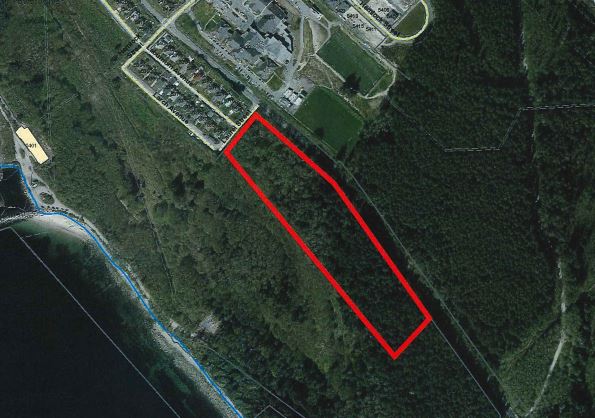 Last month, the Powell River Waterfront Development Corporation (PRWDC) accepted an offer by Sino Bright to purchase 10 acres of land next to Brooks Secondary for the development of an International School Campus.

But in a letter to the PRWDC dated March 13, Sino Bright co-owner Yufang Sun said, “We are writing to ask that you dissolve our contract for the purchase and sale of the lands listed above and that the Corporation return our deposit of $30,000.00.”

The deal has faced a firestorm from the public, some of whom alleged a lack of transparency and backroom dealings. Critics also contended that the land was sold at a bargain price. There were also some comments on social media with racial undertones, leaving Sino Bright’s Chinese owners questioning whether they were welcome in the community.

“We hope our decision will make things better as we want our students and school welcomed in your community and we want the process to be fair and equitable to the community,” Sun said in the letter.

“Just so you are aware, we have companies both here and in China; we are Canadian citizens. Our children grew up in Port Moody, attended elementary and high school in B.C. and both graduated from UBC. BC Ministry of Education officials inspect our BC offshore schools in China yearly.”

In the letter, Sun thanked the Corporation, School District 47 – Dr. Jay Yule, Scott Randolph, mayor Dave Formosa, and city councils past and present “for their hard work, dedication, and support in finding a suitable location close to Brooks Secondary over the last four years.”

“We have not given up and truly want be a positive addition to the community; however, we do not want to move forward given all the negativity, comments and controversy directed at our project and the hard working good people at School District 47, the Corporation and (the) City officials,” Sun said in the letter.

“Moving ahead in the midst of controversy would not be fair to our students, staff, organization and the community.”

Sun said in the letter that the Sino Bright owners thought, because international education was one of the goals for School District 47 and for economic development in the city, that the community supported the actions of the Corporation and city officials.

“We also understand the city is taking part in a federal program to promote immigration and business expansion with international education as a desired outcome, so it is difficult for us to understand how this became negative,” Sun added.

PRWDC president Wayne Brewer was disappointed with the outcome.

“They are very aware of the controversy swirling around it up here,” Brewer said. “They don’t want to get caught in the middle of it, so they’re basically saying, ‘We’d like to step back, not follow through with the purchase. Your community needs to have a dialogue and decide if they want encouraging people like us or not? Do you want a language school or not? Do you want a new, clean industry or not?’ I’m putting words in their mouth so to speak but that’s essentially what they’re saying, is we’re not going to get involved in this local controversy.”

Sun noted in the letter that Sino Bright’s goal was to provide a chaperoned B.C. public school experience for its students in a location outside of the Metro Vancouver area.

“Unlike regular international programs, our parents want their children in dorm like accommodation with familiar chaperones as well as local chaperones to ensure their safety and well-being,” Sun added.

“Our first priority was and still is to find suitable accommodations and allow the program to grow through our partnership with School District #47. Our plan is to remove ourselves and allow a public process to take place regarding the lands below Brooks.”

Brewer said plans to build a subdivision on the land are now on hold.

“That 10-acre lot does not exist,” he said. “It had to be carved out of the 80-acre lot. It was the buyers who were going to be buying for those costs of the subdivision and all the rest, so all of that’s on hold. It’s back to the drawing board, I supposed.”

The full text of the letter can be read here 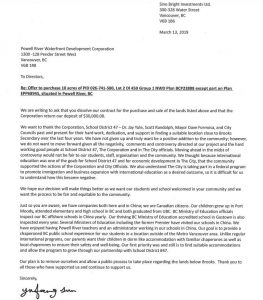