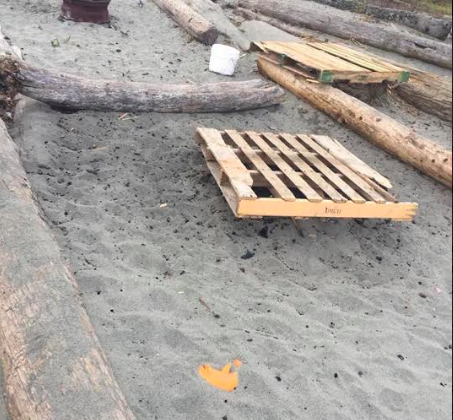 COMOX, BC- The fire pits at Little River Beach are in rough shape at the moment.

“About a month ago the volunteers put up some sign, there’s about a sixty to eighty foot are where you can have fires. They installed a couple of nice metal fire pits and even put water buckets beside each pit,” says Christian Vogl, a beach regular.

The hope for the pits is for people to go and enjoy a nice time.

“We go through our whole summers with all the bans and concerns. It is such a huge part of living on the West Coast having a little fire, roasting marshmallows and watching the sun go down.”

The thought behind it being that typically the island experiences regular fire bans and this way people can still enjoy the fun summer activity of having a camp fire.

“It seems folks are building fires outside of the pits, dragging pallets down to burn and garbage thrown around,” described Vogl

Disrespecting the designated fire pits could result in the loss of fire pits altogether.

“I don’t think it’s just the beer can crowd. There were juice boxes and broken toys. It is quite upsetting to see that families would do that.”

Doug DeMarzo, Manager of Parks at Comox Valley Regional District usually finds that people are respectful down on the beach.

“If people have concerns, they can contact us and they will be patched through. I encourage people to use the garbage cans and respect the neighbours and beach.” said DeMarzo.

Vogl wants to see the fire pits opened long term but does not like seeing it disrespected.

“I wouldn’t like to see it shut down; I was very impressed it was there. But I don’t like seeing the work of the volunteers abused and seeing the beach destroyed by this kind of behaviour.” said Vogl.