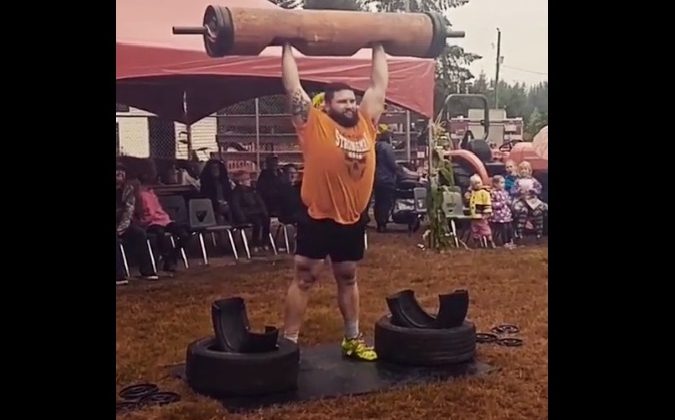 Pictured competing, Sean Hayes is one of the co-coordinators of the Comox Valley Strength Festival. Photo courtesy Adam Drummond

COMOX VALLEY, B.C. – Some very strong men and women will be converging on the Comox Valley next month, to test their skills – and will.

The inaugural Comox Valley Strength Festival is a one-day event happening on April 27, and will feature a pair of marquee and premier strength sports on the baseball fields on Lerwick Avenue.

Sean Hayes, who is coordinating the competition along with Adam Drummond, said the event began to take shape roughly a year ago.

Hayes has strong ties to strongman. He has been a powerlifter since 2014 and has been involved in various strongman competitions since 2016.

Hayes spoke about what draws him and many others to strongman competition.

“It’s fun to challenge your body in different ways,” Hayes said, “so a lot of people go to the gym and they do it for exercise and health purposes and they feel they want another outlet just to compete, just to have another solid ‘I can do this.’”

According to Hayes, while Black Creek hosts an annual strongman event, this will be the first of its kind in the valley.

Admission is by donation to the Comox Valley Food Bank.

The competition will be sanctioned under BC CAASA and Canadian CAASA as a provincial qualifier.  As the season opener, the event is expected to draw several national-level and even world-level athletes.

The crossfit competition is a four-person team challenge in a double elimination bracket.

This event is happening three weeks before the Victoria Highland Games, the largest in the world, meaning it will be used by athletes from novice to pro as a season opener and tune-up.

While still being finalized, several other attractions are planned for the day.

For adults, a volunteer-run beer licensed beer gardens will be open to the public. A vendor area with vendors ranging a variety of wares will be open for shop.

To register and for more information, visit the event’s Facebook page.