Contaminated Union Bay soil to be disposed of “on site” 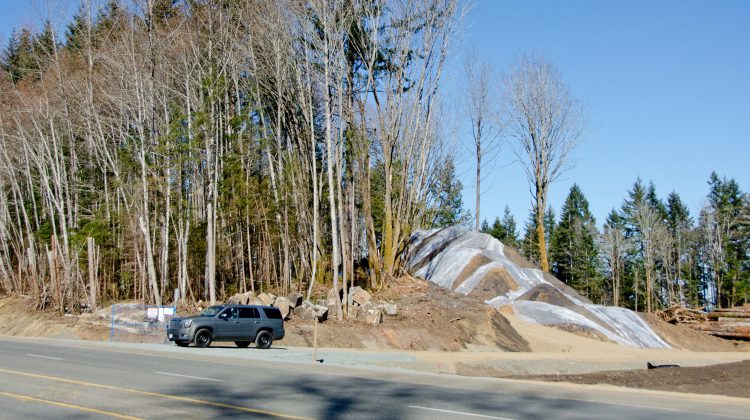 The Union Bay Estates work site along Highway 19a just north of the Washer Creek crossing is pictured on March 18th, 2019. Photo by James Wood/98.9 The Goat/Vista Radio

The development, which officially launched in March of last year, will be bringing huge changes to Union Bay, a small community in the Comox Valley’s south end.

The project, run by a company formerly known as Kensington Island Properties (KIP), is planned to bring in a total of 2,949 homes in the lightly-populated area, under the name of Union Bay Estates.

Work on the site has picked up in recent months, with land getting cleared along the Old Island Highway and near the Union Bay coal hills.

The MyComoxValleyNow.com newsroom sought comment from the provincial Ministry of Environment on the matter. According to the ministry, contaminated railbed soil was temporarily stockpiled at the site as part of the pre-development land clearing, including the work to establish an access road.

The newsroom sought more comment from the ministry about the material, and how it will be disposed of.

According to the ministry, the environmental consultant being used by Union Bay Estates at the project is preparing a plan that includes onsite containment of the excavated soils. That plan will be reviewed by the ministry as part of a remedial plan approval process.

The soils were first excavated at the end of January 2019, and placed on the same railbed. They were placed at least 50 metres from a riparian setback from Washer Creek, and are not expected to pose an environmental concern to the creek or surrounding community.

The ministry indicated that residents don’t need to be concerned about the material being dug up blowing into the community.

“The stockpiles were covered with plastic sheeting to protect against rain and wind erosion following excavation in January, with additional erosion and sediment controls installed around them,” read the ministry response.

“Heavy snowfall at the beginning of February prevented access to the site until just recently. When it became evident to the environmental consultant that the stockpile coverings required repair, additional plastic sheeting was installed and further erosion controls were implemented. This work was done the week of March 18.”

As for whether or not the ministry would be recommending any further clean up at the site, beyond the current steps being taken by the developer and their contractor, it was indicated that that would be assessed during the remedial planning and review phases.

“The site will be remediated in accordance with a remediation plan prepared by the environmental consultant and reviewed by the Ministry,” read the response.

Asked why digging and stockpiling would be allowed prior to a remediation plan being in place, the ministry had the following statement.

“At this time they are operating under a permit issued by the Ministry of Transportation and Infrastructure to construct an access road, which includes tree removal/land clearing,” read the statement.

“They are authorized to clear lands outside designated development permit areas and they must maintain buffers around watercourses and the ocean as well as around nesting habitat for eagles and heron.”

The soil will be managed on site.

“Managed on site” can mean a number of different things depending upon the nature of contamination and a site’s specific circumstances (e.g., proposed land use, size, geology, etc.),” read the ministry response.

“The qualified professionals developing the remediation plan will determine if onsite management is a feasible remediation option and, if so, will specify the actions to be carried out to ensure that human health and the environment are appropriately protected; these actions could include containment and/or treatment of contaminated material or even less intervention if supported by a risk assessment.”

There are no plans to move the soil from the site to another location, according to the ministry. They will be monitoring the project as it continues.