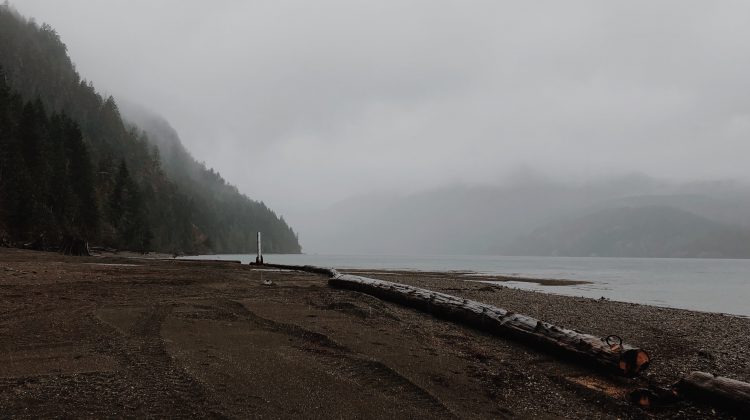 The shoreline of Comox Lake is pictured on the afternoon of April 6th, 2019. Photo by James Wood/98.9 The Goat/Vista Radio

COURTENAY, B.C- The outlook is improving for the Comox Valley’s watershed.

That’s according to BC Hydro, who released an update on the water supply forecast for the region this morning. As the agency had previously indicated, February was cold and dry, with March continuing the very dry trend with some warmer temperature.

The situation had been described as a “winter drought”, with inflows to Comox Lake reaching the lowest level since BC Hydro started keeping records.

“February precipitation was 36% of normal, and March was just 10% of normal,” read Monday’s update.

“Water inflows into the Comox Lake reservoir have been very low since early February to about mid-March. Warmer than normal temperatures since about mid-March has created some modest snowmelt and improved water inflows.”

The snowpack for Vancouver Island is around 55 per cent of normal for this time of year, according to the agency, with the regular peak snowpack coming at the end of April.

“With 131 metres being a critical level, we had initial discussions Fisheries and Oceans Canada to lower the Puntledge River flow below the normal minimum fish habitat flow to conserve water,” read the update.

Looking towards the spring, the power authourity has said that they’ve been told by the Vancouver Island Whitewater Paddling Society (VIWPS) that the 2019 Puntledge Paddle Festival at the end of May has been cancelled.

“The annual kayak event is part of BC Hydro’s water license,” read the update.

“We reached out to them in March to discuss the dry conditions and possibly providing lower kayak flows. Through those discussions arose land accessibility issues to a key part of the river, and because of that, VIWPS advised the event could not proceed.”

Hydro will continue to conserve water, releasing the minimum flow of 16 cubic metres per second and operating the Puntledge River power station at 20 per cent capacity.

“This will allow us to capture as much water as we can through the spring,” read the update.

“If water abundance increases we will increase power generation. The goal is to have the Comox Lake reservoir near full-pool at about 135.3 metres by early June. That will place us in a good position to manage through the summer.”

Water levels in the summer and early fall will depend on the rate of precipitation, and Hydro operations can change depending on the weather.