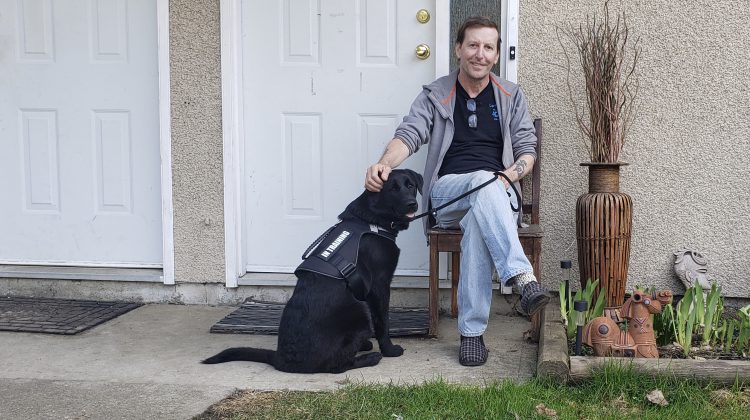 Photo of Tim Rooney and his dog taken by Jon Gauthier/98.9TheGoat/VistaRadio

CUMBERLAND B.C – Residents in Cumberland are fighting to keep their pets, and their homes.

Tim Rooney and others currently living at Cumberland Townhouses have voiced some concerns that they would be removed from the complex, because of their pets.

Rooney says the current landlords have been sending out warning letters and eviction notices since the start of March asking renters with pets to remove the animals, because they did not receive written permission to have them in the complex.

Some residents have been given multiple notices, with time limits to remove the pets.

Rooney said that he has five days left on his warning, before the landlord will issue him an eviction notice.

He added that there are currently eight other renters who have pets, and have also received notices.

The tenants say they don’t need written permission to have the pets, as verbal permission was given.

They have decided to seek out legal advice to help confirm their statement.

Shane Colclough is the legal advocate for the tenants and says, the verbal permission should be legally acceptable.

“Verbal person was given to them by the agent of the landlord, it was common practice to receive that verbal permission, and under the legal principle of the stopple, that applies,” said Colclough.

“Simply because they did not receive that in writing is not reason enough to evict them.”

Colclough also said that the landlord doesn’t need proof in order to give out eviction notices.

He says he believes the landlords are aware of the situation, and he hopes they understand that the verbal permission is acceptable.

“At this moment, I believe the agents of the landlords have been informed that what they are doing has no grounds, but that doesn’t meant they wont go forward with eviction.”

“I hope in this case that the landlords can come to reason and observe the fact that they had provided verbal permission to various tenants in respect to their pets, and they can’t unilaterally impose these new restrictions on the tenants,” Colclough added.

Colclough has also stated that as of right now the tenants are waiting to hear from the landlords to see if further notices will be coming.

“If the landlords have determined the time frame to have passed, they are now going to possibly take action with a further notice or an eviction.”

The MyComoxValleynow.com newsroom reached out to a representative of the landlord for comment, and as of this publication has not heard back.