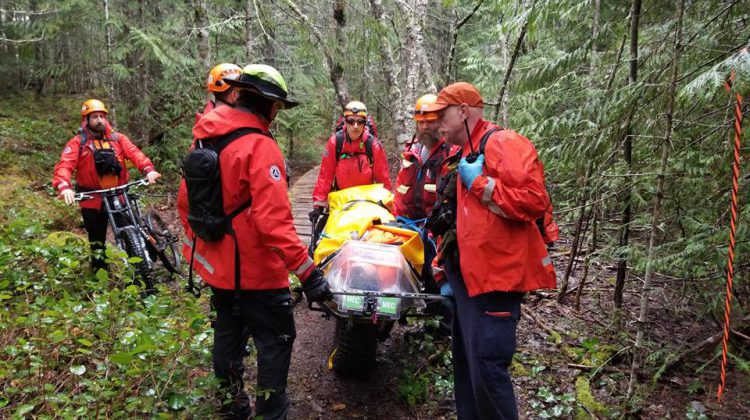 The team was called to Forbidden Plateau near Cumberland just after noon to assist BC ambulance crews with a medical evacuation of the injured man.

“Once we were able to determine where the fellow was, we headed in on Comox Lake Road and up Boston Main (logging road) because it was going to be a faster approach. Lots of mountain bikers start with the mountainside and come across towards Comox Lake.”

Berry said it was not a difficult rescue.

“It was about a 40 minute hike in for the team and then they stabilized the patient.”

It took just over an hour for Search and Rescue members to wheel the mountain biker out on an stretcher, back out to the Boston Main road.

He was then transferred onto a UTV vehicle and then to a waiting ambulance.

The mountain biker was taken to Campbell River by BC Ambulance for treatment of a dislocated ankle and fractured lower tibia (shinbone).

Berry said there were 15 SAR members involved in the rescue.

Rescues of mountain bikers are becoming more common just because of the sheer number of people who are getting out to the back country, according to Berry.

“Mountain bikers are a pretty tough group a lot of the time and if they get an injury they’ll hike themselves out with their bike(s) but in this case it was a pretty severely dislocated and fractured lower leg,” he added. “He wasn’t riding anywhere.”

Berry said the volume of calls to Comox Valley SAR is up roughly 40 percent compared to the same time last year.

“All teams across the province are up (in terms of call volumes), just because more people are out doing good, healthy things in and around the valley,” Berry said.