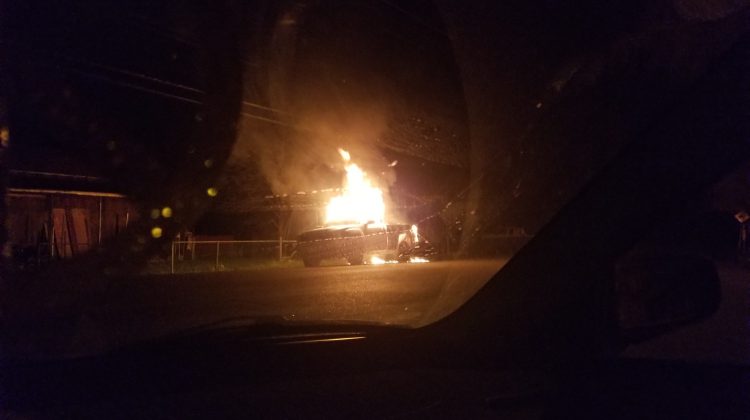 At approximately 11:00 p.m. on Friday, someone left a truck to burn across from the Merville general store. Photo courtesy of Cheyanne Chowns.

MERVILLE, B.C. – A truck was lit on fire near Merville’s general store at around 11:00 p.m. on Friday night.

According to Comox resident Cheyanne Chowns, she saw the truck on fire as she was passing by on her way home.

“I left my brother’s house and it (the truck) was across from the (general) store. It looked like it had recently been left there, like within the past ten minutes or so,” Chowns said.

She said she spoke with a resident who lived near where the incident occurred.

“She said she had just called 911 right before I arrived. But somebody just rolled up and left it there and torched it, then walked north up the highway.”

Chowns said she also called 911, but was told that it had already been phoned in.

There is no word yet on why the truck was set on fire or who set it on fire. We will provide updates as more information becomes available.