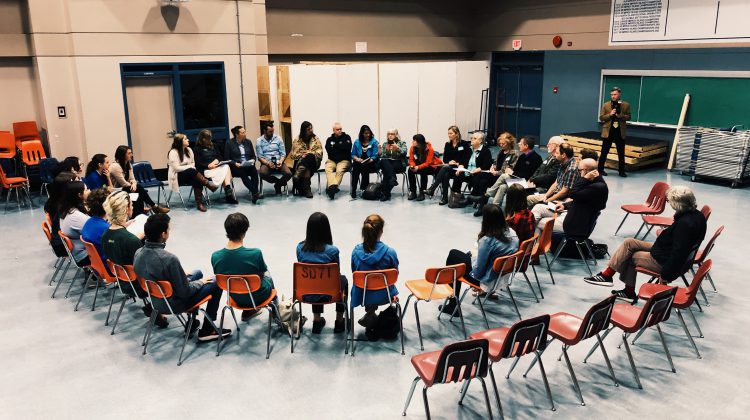 COURTENAY, B.C- Secondary students concerned about the environment met with an assembly of the Valley’s municipal leaders this afternoon.

With space provided by Isfeld on Monday afternoon, the group hosted the three mayors of Courtenay, Cumberland, and Comox, along with council members from the three communities, schoolboard member Sheila McDonnell, and Comox Valley Regional District (CVRD) Area B Director Arzeena Hamir.

The meeting between the students and the politicians lasted about an hour, and was guided along by Nalan Goosen, a member of the Isfeld Environment Club.

Goosen started things off by asking representatives of each community for three actions taken by their administrations to help the environment, while mentioning a desire for the CVRD to write a “stronger” climate accountability letter than had been previously written by Courtenay. The district sending a letter will be discussed by the board of directors on Tuesday.

Councillor Will Cole-Hamilton, speaking for Courtenay, mentioned the city’s letter as an example of action taken to help the environment. He also defended the language used in the document, which was aimed at being less confrontational.

As for two other actions taken by Courtenay, Cole-Hamilton mentioned work on a network of electric vehicle charging stations up and down the Island in conjunction with local government in Nanaimo, as well as a possible plastic bag ban, which is up for discussion this evening.

Comox mayor Russ Arnott spoke for his community’s actions. While mentioning the installation of bike lanes along a re-done stretch of Noel Avenue, he said Comox got money from gas taxes used for those lanes, which showed a benefit to the community.

He also brought up action’s taken by Comox to lower woodsmoke in the community, while saying that other communities need to do the same thing. Lastly, he mentioned a possible ban on plastic bag usage in Comox, something he didn’t anticipate any issues with going forward.

Cumberland mayor Leslie Baird gave examples of specialized planning that Cumberland is undertaking, with an eye to protect local wetlands and preserve biodiversity. According to Baird, any development coming into the village would need to adhere to their guidelines to maintain the health of the local environment.

Courtenay mayor and CVRD board chair Bob Wells spoke for the district, mentioning the installation of a solar array near ABC Printing and instruction on solar energy use.

He also brought up the management of organic waste at the regional landfill, the district’s woodstove exchange program, and the recent move by coastal communities to press for a moratorium on the herring fishery.

He praised the students for their protest back on March 15, which had brought a large group of students to the front doors of Courtenay city hall to demonstrate, while mentioning he took similar action when he was in high school.

The meeting then moved on to three demands the students had for their municipal governments.

They first asked that recycling pickup in the Valley be done every week, while garbage pickups would be done every two weeks, with the aim of encouraging people to recycle more and create less garbage.

They also asked for the creation of an environmental sustainability committee, with membership from youth and local elected leaders.

The last ask was for the declaration of a “climate emergency” in the Valley.

The three requests had a mostly positive response. Wells brought up a pilot program that has been ongoing with Comox for the last ten years to divert organic waste, and expressed a desire to see it done across the Valley.

For the committee, the elected leaders encouraged the students to approach each community government separately as delegations, with an eye towards establishing the committee at a regional level in the CVRD.

Hamir spoke to the students about the climate emergency ask, mentioning that CVRD directors would be tracking their own carbon footprints and encouraging the other municipal leaders to participate.

She stated she would be bringing forward a motion for a “climate emergency” declaration tomorrow.

Discussion eventually moved to the question of electrification in municipal vehicles, which prompted Arnott to tell the students that local governments only handle so much, before having to seek grants from other levels of government.

He suggested bringing in local MLA Ronna-Rae Leonard and the MP’s for the area, stating “they need to hear this too”.

Wells was open to the idea of electrification, citing an experience with an electric bus demonstration in Victoria.

The students than asked about the possibility of climate change being included in local school curriculum, which was answered by McDonnell. She believed it should be a strategic priority, mentioning a desire for more composting and recycling in the local school system.

After that point, the meeting began to wrap up. With the bells delayed after the lunch break to allow for more time, principal Sean Lamoureux thanked the politicians for coming, and stated that nothing had been known about the meeting until a few days ago.

According to him, everything was being driven by the students in the environmental group, and he had “never met so many politicians united on a single thing”.

After the meeting ended, the students and leaders exchanged contact information.

Goosen told the MyComoxValleyNow.com newsroom that the event had gone “lovely” and he really understood the support that the group was getting from the elected leadership.

“It was quite incredible, actually,” said Goosen.

“We’re really looking forward to future meetings with them, because now we’ve established a solid friendship, and alliance. As that grows, we can also work on taking even more direct action.”

Goosen, who is in Grade 9, plans to keep the group going throughout his time in secondary school, and wants to see more students from around the Valley join in.

“We want to strengthen this,” said Goosen.

“This is the start of my activism career.”