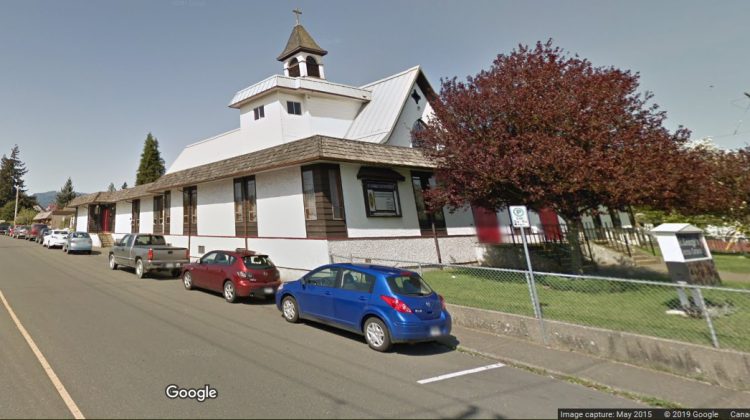 The exterior of the church, sourced from Google Streetview.

COURTENAY, B.C- A major soup kitchen in the Comox Valley will be getting funding from the City of Courtenay.

According to a letter attached to Courtenay’s council agenda for March 18th, 2019, St. Georges United Church was looking for city funding of $25,000 to support a renovation of their kitchen, and two adjacent washrooms.

Due to the timing of their renovation, it didn’t fit with the city’s schedule for grants, making the request for funding “extraordinary”.

Included in the church’s letter was a mention of their Sonshine Lunch Club, which serves hot meals five days a week out of the kitchen for the past 23 years. It regularly serves 100 to 130 homeless or disadvantaged residents of the Valley.

The project was short $21,700, and the church strongly believed the volunteer services it provided warranted financial assistance from the city.

When council discussed the matter, they put off an immediate approval of funding, instead asking staff for a report on how much money would be available to them for use.

The matter came back to council on Monday evening, with approval granted for $25,000 from gaming funds to go towards the renovation project.

The motion for approval came from councillor Will Cole-Hamilton, and was seconded by councillor David Frisch, who included the line about going from gaming funds.

A point raised by Courtenay CAO David Allen was a move by the city to provide information about all sources of potential funding to non-profit groups, in order to provide more assistance for people looking for grants.

After that was discussed, the only voice of disagreement for the move came from councillor Doug Hillian. He expressed reservations about the idea of the city making a donation to a church, given the tax exemptions already used across the community for places of worship.

However, he said that reservation was “tempered” by what the club does for the Valley. He said it functioned as a social service, and many people wouldn’t get a decent meal in the day if it wasn’t there.

He eventually said he was happy to support the request, though he wanted to see the city’s policies on grants in aid reviewed. It then passed without opposition, and mayor Bob Wells thanked council for getting it done.

“When we look at what the Sonshine Club does, the impact that it has on our community, the people that it serves, and the fact that one of our criteria that it supposed to be for folks who are benefiting from the entire Comox Valley, I think that is ticking off a box,” said Wells, after the meeting.

“Obviously, our council has a big focus on the less fortunate in our community, and making sure not just from a housing perspective.”

EDITOR’S NOTE: The original version of this story had the amount granted as $20,000. This was incorrect, and has been fixed to the correct amount of $25,000.