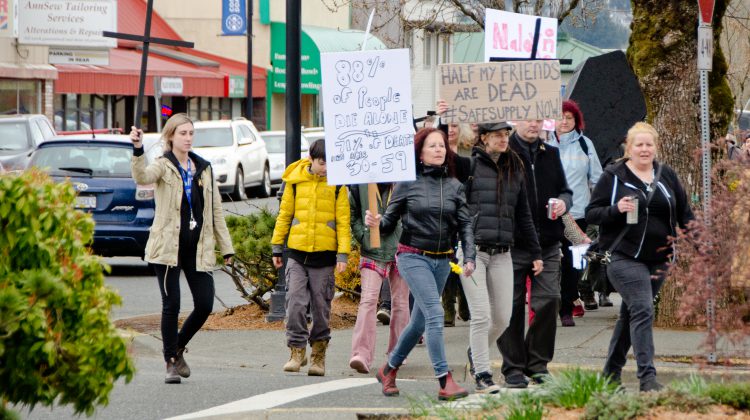 Marchers in the National Day of Action walk through Courtenay's downtown core on April 16th, 2019. Photo by James Wood/98.9 The Goat/Vista Radio

VANCOUVER ISLAND, B.C- Organizers at National Day of Action events across Canada say its time to end the stigma, have a conversation and utilize harm reduction strategies to decrease the numbers of those dying from illicit drug use.

One of the initiatives called for today is the legalization of a safe supply of heroin for chronic users who are now forced to access the unpredictable and toxic supply of street drugs from organized crime.

Over 60 per cent of the people who have died from an overdose are using at home alone because they don’t want anyone to know they are using.

Marchers in Courtenay gathered outside the Valley’s courthouse, and made multiple loops through the city’s downtown core.

According to Maddison Alexander, a member of Addicts and Allies Humanizing Addition (AAHA), the biggest thing to take away from today’s activities was how much the overdose crisis affects people.

“It’s not just the addicts, not just somebody away from us who we don’t know, it’s really inside of all of our families,” said Alexander.

She said she had had a good friend and a cousin pass away from overdoses, and believed that attendees of the Courtenay event could take away “quiet reflection” in their own lives, back to their families, which could help end stigma against drug users.

“If we take away from the stigma, then we can see that we have a disease, as an addict, and we need the same help, the same healthcare, and the same respect that anybody should get, whether or not it’s cancer that they have or some kind of diabetes,” said Alexander.

“We need a safe drug supply, as part of our medication as addicts to be able to live our days, to not go into withdrawals and all that kind of stuff. I think the biggest thing is to help end the stigma, so that the whole world becomes a safer place, where we have overdose prevention sites, and we don’t have people scoffing or spitting on a human being because of the way they live their lives. In fact, we can help out that person.”

Roughly 50 people were in attendance, and participated in the march.

-with files from Sharon Vanhouwe