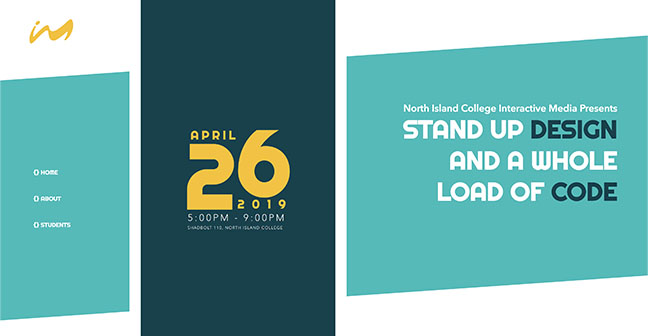 COURTENAY B.C – Students at North Island College will showcase their design and developing skills for an event coming to the college this week.

The Interactive Media Grad show will feature the best work of Vancouver Island’s up and coming designers and developers, before they graduate from the program.

The event starts on Friday, April 26th and will run from five until nine p.m in the Comox Valley campus’ Shadbolt Studios, which is located at North Island College.

According to a release from NIC, it will showcase apps, games, graphic designs, websites and branding concepts from 13 interactive media graduates. The event is open to the public and admission will be free.

Megan Wilson, the interactive media instructor for NIC, said in the release the event shows just how far the students have come.

“It’s exciting to reveal what students have been working on throughout the year.”

“By the time they graduate, students are ready to work in the creative industry and many already have clients or job opportunities,” said Wilson.

Students are divided into three teams to each produce a new website for the showcase event, and a panel of judges selected the strongest overall entry to serve as the official website for the event.

Student Alyssa Willis was project manager for the team behind the winning website, and she says the program allows you to develop the skills you need in the work force.

“I think the fact that we do everything from ideation to actually implementing a vision is great,” she said.

“You’re doing a bit of everything in this program and gaining the skills you need.”

“NIC’s interactive media grads are capable of high-quality work. They have the skill set, and they’re in sync with current industry practices, which is a huge advantage from a hiring perspective,” he said.