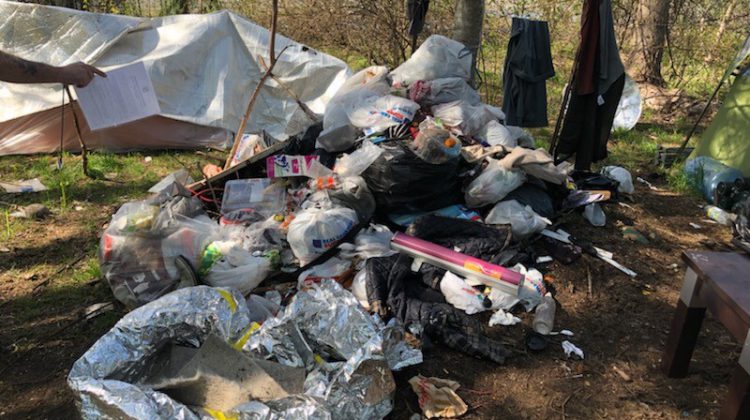 A city-supplied image of items at the camp.

COURTENAY, B.C- Homeless residents of the Comox Valley living behind a pump station on Comox Road will have to find new places to stay.

According to a statement from the City of Courtenay, eviction is being ordered at the site due to “significant safety concerns” expressed by the Comox Valley RCMP and others. Those concerns stemmed from the number of people at the site, and increasingly hazardous conditions, as well as reports of criminal activity.

“There are also environmental concerns due to the condition of the site and its proximity to the Estuary and Hollyhock Flats,” read the statement.

“To date, the City has spent over $5,000 on clean-up and restoration at the site, in addition to significant staff resources. People camping on site have been given notice to vacate by the City under the Trespass Act.”

The statement indicated that the Comox Valley Coalition to End Homelessness is involved with outreach activities to support the residents leaving the camp.

According to the city, any sleeping or camping equipment and associated effects still on the site after 3:30 p.m. on Monday will be removed by the city contractor on Tuesday.