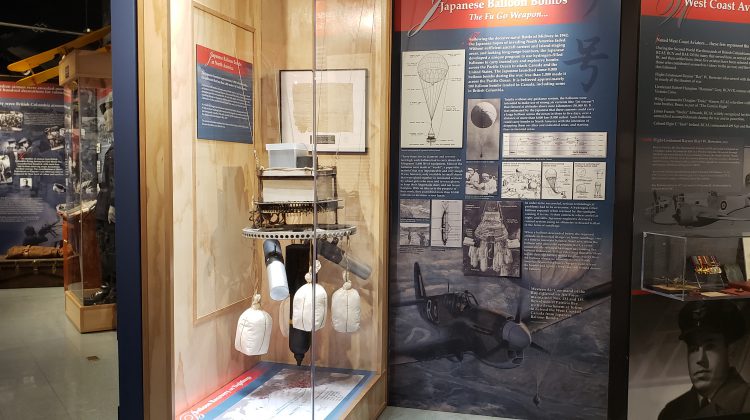 Photo of the re-created balloon bomb taken by Jon Gauthier/98.9TheGoat/VistaRadio

COURTENAY B.C – The Comox Air Force Museum have restored a Japanese balloon bomb from the 1940’s and it’s currently on display.

According to Deputy director Sgt. Mike O’Rourke, the new additions to the bomb and the new display case were made by volunteers.

“Our volunteers made a whole new display case, and when we looked at the pictures and the images of how it was made, we said we have to dress it up a little bit more,” O’Rourke said.

“We put some of the batteries and some working parts. We put in the bomb, the sandbags, and the fire bombs, just so it looks a little more realistic.”

The metal ring was the only original piece and was added to the Comox Air Force Museum in the early 80’s on a long term loan from the Canadian War Museum.

O’Rourke added that during the war the Japanese had launched over 9,000 of the balloons, but only 100 are suspected to have reached North America.

Carol Popkin, the program manager and volunteer coordinator for the museum said that with the new display case, they hope it stands out.

“There’s a lot in the gallery to look at, but this an interesting piece, because its quite unknown.”

If you would like to view the new exhibit or would like learn more about the museum and its events, it is located at the corner of Ryan Road and Military Row near the main entrance to CFB Comox.