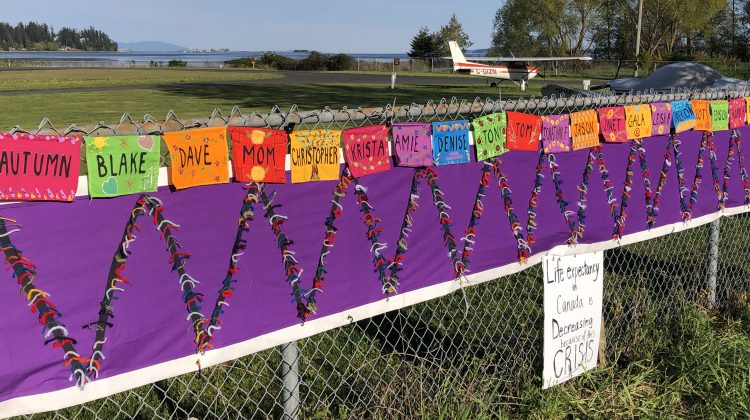 The overdose memorial at the Courtenay Airpark is shown on the afternoon of April 30th, 2019. Photo by James Wood/98.9 The Goat/Vista Radio

COURTENAY, B.C- A poignant reminder of the overdose crisis has been installed at the Courtenay Airpark.

A memorial made up of ribbons, names, and flags has been placed across the fence surrounding the runway at the popular Courtenay park, across from the playground at the southeast corner. The installation was created by Judith Conway, a Comox mother who lost her son Matthew in 2017.

To memorialize her son and others, Judith attached 100 flags to her fence in Comox. The flags are adorned with the names of people who died from drug overdoses in the Comox Valley and across B.C.

The ribbons and flags that make up the memorial were recently blessed by the Pope.

Conway wants to make sure people in the Valley talk about overdoses, and that goal is already being realized by having the memorial down at the Airpark.

“I think it’s great,” said Jennifer Omelko, one of many people who saw the memorial on Tuesday.

“I think as many people that can be aware of the situation that’s going on, not only here but everywhere, it needs to be known. I think it’s very important to spread the word, family, loved ones, friends, everybody, and it’s just very, very sad. I don’t think enough people are going out of their way to be knowledgeable about it. When you don’t see it, you ignore it. The more that it’s in your face, maybe you’re going to pay more attention.”

Omelko was at the park with her son and niece, taking their dogs for a walk. She believed kids need to know about the overdose crisis as well, especially if their own family members have been affected.

“They need to be able to understand to a certain extent of their age, what’s going on, how it’s affected them, and all of that,” said Omelko.

The installation was put up this week.