Towhees rugger ‘like a locomotive coming off the tracks’ 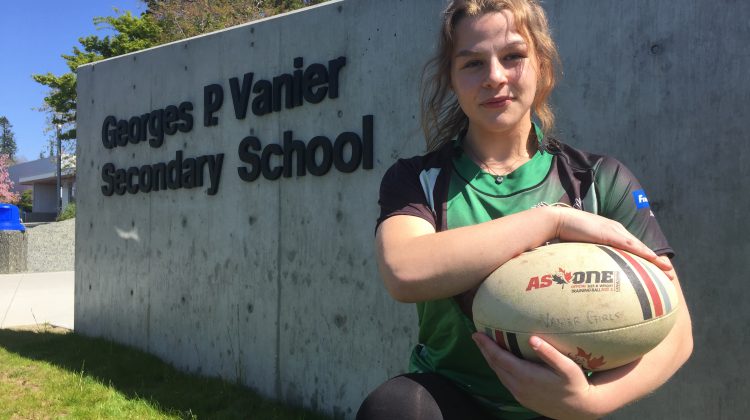 COURTENAY, B.C. – There’s a switch that flicks on inside Hannah Bourbyn when she tightens the laces on her cleats and steps onto a rugby or football field.

It’s that kind of fiery competitiveness that has garnered attention from U16 provincial girls rugby coaches, who have been in steady contact with her GP Vanier Towhees coach, Steve Fagan.

“Every time Hannah plays, I get phone calls or I get coaches (who say) ‘Who is that?’ And the U16 team for B.C. has contacted me several times, just like, ‘Yeah, we want her’ and ‘we’ll do everything we can to get her on the team,'” Fagan said.

Fagan saw potential in Bourbyn right from the start of her rugby career, when she travelled to GP Vanier from Huband Elementary in her Grade 7 year to train with the Towhees.

“She started off playing at a very young age compared to the other players who were here, and right away she just hit the mark,” Fagan said. “She was focused, driven personally towards the game. She caught on really, really quick, and from there, she just excelled.”

According to Fagan, Bourbyn worked on her conditioning to the point where she went from playing 10 to 15 minutes a game, to staying on the pitch until the final whistle.

Meanwhile, Fagan said she is “just a pleasure to have on the team.”

“Off the field, she’s calm, quiet, cool, collected, keeps to herself, but also a very team-friendly person. But put a rugby ball in her hand and a jersey, she turns into this driving force. It’s like a locomotive coming off the tracks. She’s unstoppable.”

Bourbyn, who is in Grade 10, plays prop, tighthead prop and eight for the Towhees senior girls rugby team.

“For prop, I’m at the front of the scrum and I push,” she said. “We lock with the other scrum and just push over the ball. It’s kind of like the power position, I guess.”

Once the ball’s in play, Bourbyn said she ‘rucks’ over the ball and get involved with the play.

In four short years playing rugby, Bourbyn has made an impact in more ways than one.

“I’ve just heard good feedback from a few of the coaches and I’ve also caught the eye of a few provincial level coaches who are interested in having me on their rep teams,” she said.

The moment she started playing rugby back in Grade 7, Bourbyn was hooked.

“It’s awesome. It’s so good,” she said. “I love it. It’s such a family sport, and it’s so good to be with a group of girls and it’s such an involved, active sport, too. You can go so many places with it. I love it a lot.”

And while she’s a two sport athlete, playing on the defensive line with the Comox Valley Raiders bantam football team, Bourbyn is likely going to have to hang up her shoulder pads.

That’s because girls (and women’s) rugby will open more doors for a potential scholarship and national and Olympic team aspirations than the gridiron would.

“I definitely want to go university level and sometime make the Olympics,” she said. “National-level rugby would be my dream. Education comes first. It’s like, university and hopefully rugby with my university would be ideal.”

She added, “There (are) rugby programs that I could be playing during football season, and if rugby is more of a priority to me, I think I more want to focus on that than risk getting injured around the bigger guys, because going up for my next level for football would be against much bigger guys compared to me.”

That said, Bourbyn loves football, for the most part playing with and against boys.

“It’s definitely different but it’s also no different in that type of way,” she said, comparing football with rugby. “It’s still a family sport. You play your position and you have friends on your team and you’re close with your coaches and you just kind of learn. It’s different because it’s all guys around you and there are a few other girls on your team who you get really close with.”