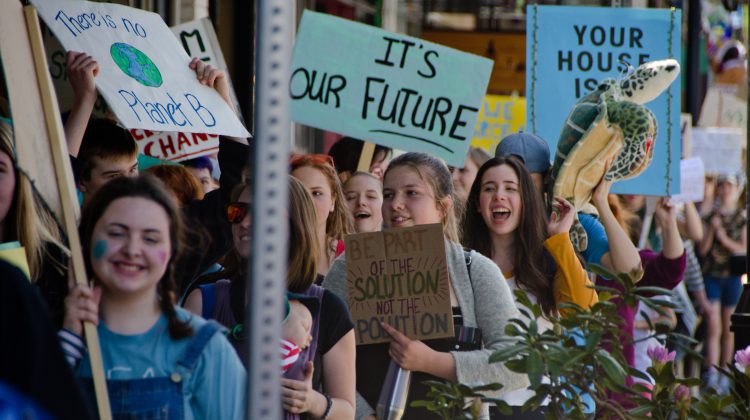 Participants in the climate march walk through downtown Courtenay on May 3rd, 2019. Photo by James Wood/98.9 The Goat/Vista Radio

According to organizers with Youth Environmental Action, the student group that organized the march, more than 150 youth from across the Comox Valley area took part in today’s rally.

It started off at Courtenay City Hall at 1:00, and wound its way through the downtown area to protest at different banks.

The marchers took to the sidewalks from City Hall to the CIBC branch along Cliffe Avenue, then made their way up 8th Street and turned right at England Avenue. From there, they walked to the BMO branch, and then over to the offices of Courtenay-Comox MLA Ronna Rae Leonard and Courtenay-Alberni MP Gord Johns.

Both Leonard and Johns were present for the march, with Johns participating in the route. Both spoke to the gathered students, praising their actions, and participated in a question and answer period.

After that stop, they made their way down 5th Street and stopped at the Scotiabank branch, ending at the intersection of Cliffe Avenue and 5th Street. After shouting slogans at both locations, the students made their way back to Courtenay City Hall and ended their march.

Multiple local elected officials participated in the march, as well as adult volunteers. Courtenay’s municipal government had declined to provide road closures for the event, so the adult volunteers helped to block traffic while the protestors made their way through their route.

Area B director Arzeena Hamir was present at the march, and said it was “heartwarming” to see, and gave her hope for the future. She also believed it was worth the impact on traffic.

“Climate change is going to have an impact on us, whether we like it or not, and we are going to be made uncomfortable,” said Hamir.

“A little bit of traffic discomfort, that’s nothing compared to what we’re going to be facing.” 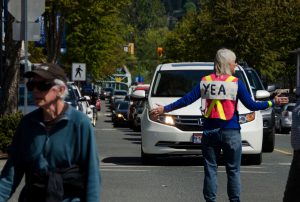 An adult volunteer blocks traffic in downtown Courtenay during the climate march on May 3rd, 2019. Photo by James Wood/98.9 The Goat/Vista Radio 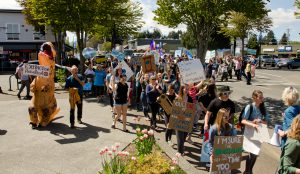 Participants in the climate march walk through downtown Courtenay on May 3rd, 2019. Photo by James Wood/98.9 The Goat/Vista Radio 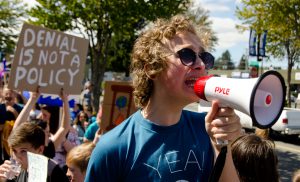 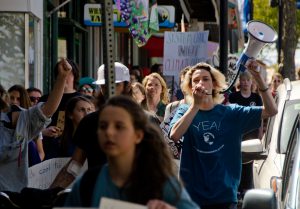 Sharp was pleased with the turnout, saying that it was three times the size of previous student marches in the Valley. He also indicated that the students are planning on more actions in the area, such as organizing cleanups of ditches, lakes, forests, and beaches.

“Over time, they’re just getting more and more garbage and trash that is left within, so one of our goals is to clean up the Valley,” said Sharp.

“We want to host multiple beach cleanups, forest cleanups over the summer, and to the end of the school year as well.”

As for the next march, Sharp indicated that Youth Environmental Action will be taking a month or so to figure out the future plans on that front. They “definitely” want to do bigger and better ones.

Asked about the impact on traffic in the downtown core, given the lack of road closures, Sharp was still happy with the decision to head through the downtown.

“We believe that in order for our message to be as powerful as it could be, the street is the way to go,” said Sharp.

He said that they had been contacted by the city before the event, with an RCMP officer speaking to the students as they set up today. They were told it would “not be best” to go into the roadway.

“We went with what was safe, for today. We might do something more interesting next time,” said Sharp.

Traffic was backed up through 5th Street and Cliffe Avenue as the group made their way through those intersections. Sharp had a response to any drivers who were impacted.

“We are just a bunch of youth, running through the streets. Can be annoying to some people, but we believe it to be necessary and it’s not very long. So, I think it’s a necessary sacrifice, especially because it’s not hurting anyone, necessarily.”

Students who left school today will not be facing any penalties.