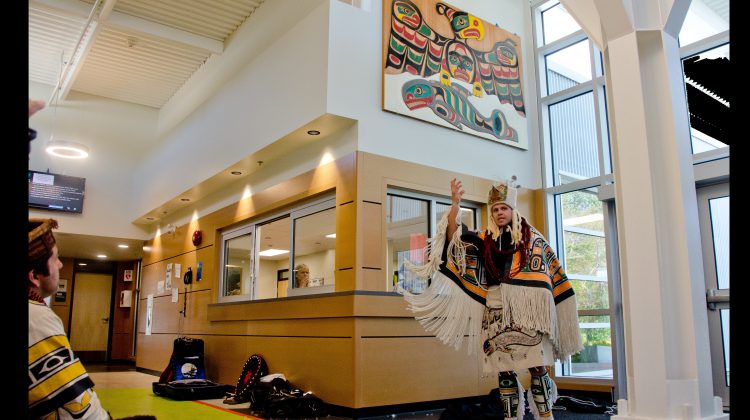 Karver Everson speaks at GP Vanier after unveiling his carving in the front lobby on May 9th, 2019. Photo by James Wood/98.9 The Goat/Vista Radio

COURTENAY, B.C- A new piece of art has been installed at a Valley high school.

Early Thursday afternoon, a brief blessing and unveiling ceremony was held in the front hall of Georges P. Vanier Secondary School as K’ómoks First Nation carver Karver Everson revealed his work to an audience of high school students and staff.

Part of the blessing ceremony at GP Vanier today for the new carving. #comoxvalley #yqq pic.twitter.com/XsEZj2pEi6

The work, which is currently untitled, has been placed above the school’s office entrance. It features a thunderbird for the Pentlatch people, and a white whale for Queneesh, the embodiment of the Comox Glacier.

According to Everson, School District 71 had approached him about the creation of a piece for Vanier that would reflect the local First Nations and K’ómoks First Nation. The carving took two months of full-time work to complete, and he said he was very happy to have had the opportunity to do the work for the school.

He had been introduced prior to the unveiling by Vanier’s current vice-principal, Lee McKillican, who had taught him at Highland Secondary.

McKillican had high praise for Everson, citing him as one of his favourite students and a natural leader in a hockey academy he had run at Highland. He was also impressed by the carving.

“So much of what we do is about creating connections,” said McKillican.

Everson hopes the artwork makes an impression on Vanier students.