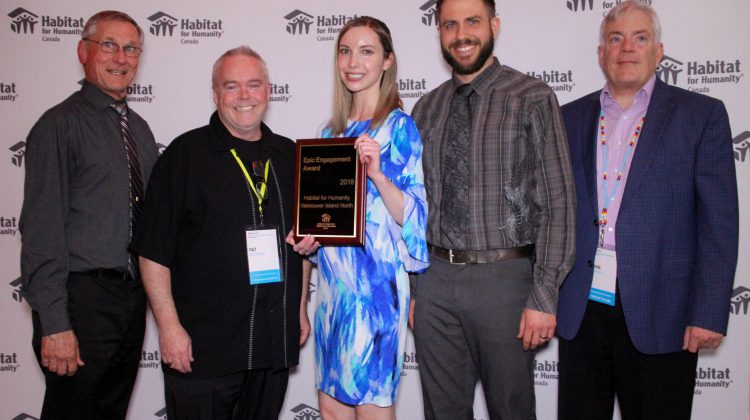 NORTHERN VANCOUVER ISLAND, BC – Habitat for Humanity Vancouver Island North (Habitat VIN) has been working hard, and it’s paid off.

According to a release, the organization was given the Epic Engagement Award during the Habitat Canada National Conference in St. John’s, Newfoundland.

The Epic Engagement Award is one of five awards presented at the conference gala, and goes to a Habitat that is successful in building their presence and engaging with their community.

2018 was a remarkable year for Habitat VIN, as it was the first year the organization had two builds at the same time.

Habitat VIN took on major projects in Campbell River and Courtenay, which will provide a total of 21 homes for local families by the end of 2020. The organization engaged community members within the two cities and surrounding areas to support them through volunteering and donating.

The organization also hosted six Global Village teams who travelled from all over Canada and the US to contribute to local builds while they toured the North Island.

Another part of engaging with community was changing the way people saw Habitat and clearing up myths about the program by encouraging staff and volunteers to be advocates for the organization.

“Some people think that we give homes away for free to homeless people, but we actually partner with low-income working families who help build their home and then pay an affordable mortgage. Many also don’t realize that the ReStore supports the building of these homes,” Cady Corman, Habitat VIN’s marketing and communications manager wrote in the release.

Even though Habitat VIN has successfully engaged the community to take action, they still are in need of additional volunteers as building continues.

Habitat VIN will be building eight homes this year, which is double of what they built last year.

“We encourage anyone in our community to spend just one day on our build site or in our ReStore. Even if you have no experience, one day of your time would make a significant difference for Habitat and the local families we partner with,” Corman added.