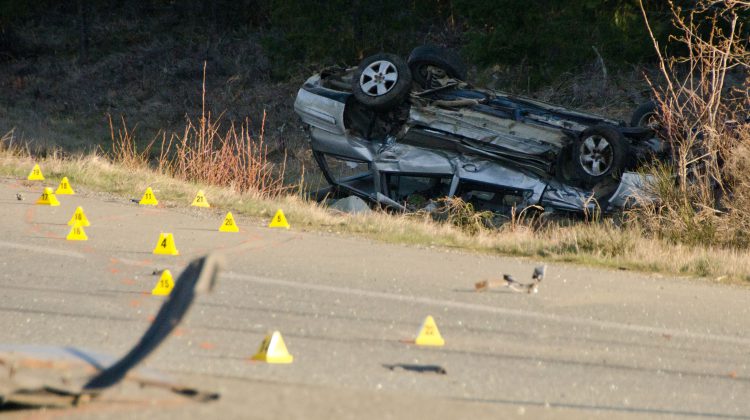 A file image of the accident scene from April 2nd, 2018. Photo by James Wood/98.9 The Goat/Vista Radio

Grant is the woman charged after a fatal hit and run last April, which left a man from Merville dead.

Last year, a 41-year old woman from Oyster River was arrested after the deadly crash between a silver Volkswagen Jetta and a 2000 grey Toyota Tundra at the intersection of Jubilee Parkway and Highway 19 around 5:45 a.m. on April 2.

The Tundra didn’t stay at the scene after the collision, which left 39-year-old Chris Pys, a Merville-area resident, with life-threatening injuries.

He later passed away in hospital, leaving behind his fiancée, two young children, and many friends.

The suspect driver had been sought by police, and according to the RCMP, the Toyota Tundra was located in a driveway at Fearon Road in the Oyster River area around 11:00 a.m. the same morning.

The woman was arrested on scene. She was listed as the registered owner of the vehicle.

After a long investigation, Grant was charged in early March of this year. She faces one charge driving without due care and attention, and another of failing to remain or immediately return to the scene of the accident.

According to information from the Campbell River courthouse, those charges were sworn on March 6th, 2019. Since then, Grant’s case has been making its way through the court system.

While her latest appearance was set for May 14th, to set a date for trial, the online information for her case has been updated with a series of trial dates.

The provincial courts online registry now states she will have a pre-trial conference on February 3rd, 2020, followed by a trial date of April 3rd, 2020. A series of additional dates in April have been set aside for the continuation of Grant’s trial.

The Campbell River courthouse has confirmed those dates.