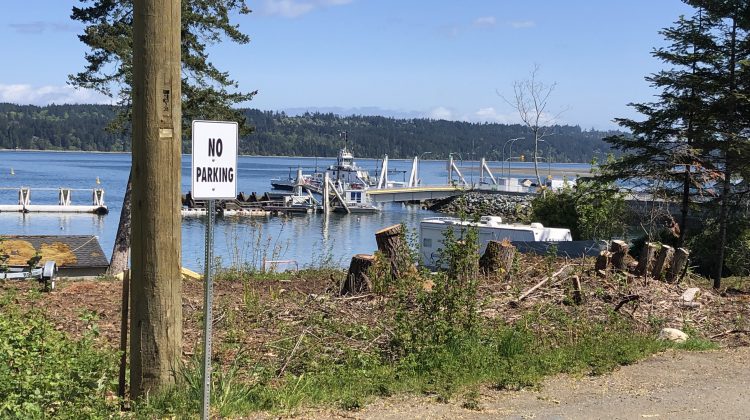 A no-parking sign is seen along a property on Buckley Bay Frontage Road on May 2nd, 2019. Photo by James Wood, MyComoxValleyNow.com staff.

BY JON GAUTHIER AND JAMES WOOD

BUCKLEY BAY B.C – Gracie MacDonald is concerned about vandalism to her car.

Last month, MacDonald told the MyComoxValleyNow.com newsroom that her car was first damaged in July of last year, after she parked in front of a house close to the Buckley Bay ferry terminal.

MacDonald said firewood was piled on top of her vehicle, breaking a side mirror and causing dents.

Since then, she says more and more vehicles appear to be vandalized, and now it seems to be escalating.

She believed the reason behind the vandalism is because a local landowner doesn’t want other residents parking in front of their house, but the parking spots along the road are public property.

She said the landowner had put up ‘no parking’ signs to deter people from parking, but those signs were on the property of the provincial ministry of transportation, and not legal.

The province confirmed that information.

“The ministry has sent the property owner a letter requesting that the unauthorized signs placed on provincial right-of-way be removed,” read a statement from the ministry.

“If the owner doesn’t comply within a reasonable time frame, the ministry’s maintenance contractor will remove the signs.”

The MyComoxValleyNow.com newsroom also asked MacDonald if the victims reported the damages to the police and she said some are scared to report the incidents, because they believe the damage could get worse.

The Comox Valley RCMP confirmed that they had looked into reports of vandalism in the Buckley Bay area. However, there was not enough information to proceed with charges.

They are asking anyone who experiences anything suspicious to call the detachment with the information.