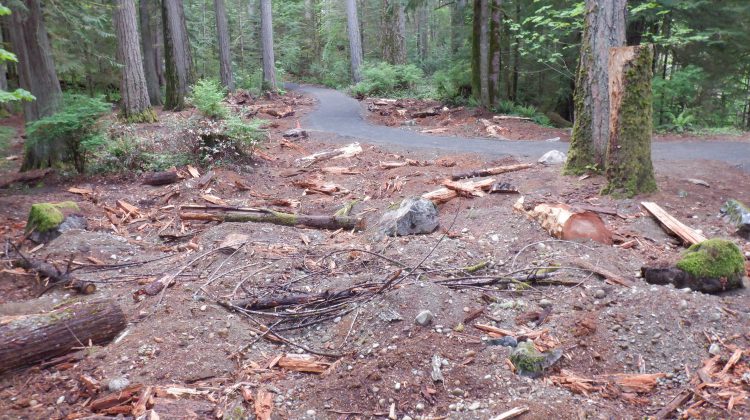 BC Hydro is removing the two original Elk Falls Provincial Parking lots through an agreement with BC Parks. This was the view last week of the former upper parking lot. Photo courtesy BC Hydro

And so are the final touch ups to the surrounding Elk Falls Provincial Park.

According to a BC Hydro release, the project required a parks boundary adjustment that will “ultimately lead to a net gain to the park, and another benefit was the Rotary Club-constructed Elk Falls Suspension Bridge.”

Part of the project includes BC Hydro freshening up the existing parking lot, including painting new road lines.

The work to remove and restore the original parking lot pavement and freshen up the new parking lot is a combined cost of about $90,000, with an additional $30,000 from BC Parks for restoration planting, trail work and monitoring.

“For years we’ve been discussing with BC Hydro what Hydro lands may be transferred over to BC Parks at Elk Falls Park as early as 2020,” said BC Parks area supervisor, Brent Blackmun.

Meanwhile, the release noted that since the project’s inception in 2007, there have been a lot of wins along the way.

“We’ve come a long way on how the John Hart project was planned, designed, and constructed,” said BC Hydro spokesperson, Stephen Watson. “Over that time we’ve worked collaboratively with BC Parks so that we could have a successful project, and BC Parks could benefit as well. Looking back I think it’s been a big success for us and BC Parks.”

Watson  noted that there was “three project drivers.”

“One was reliability, (as the original station) was basically 70 years old; we had a risk to downstream fish habitat from unplanned flow reductions from the powerhouse; and then there were earthquake risks, where the penstocks and the old powerhouse would not be able to withstand even a low to moderate earthquake,” he explained.

All of those issues have been resolved, according to Watson.

“It’s all underground it’s in bedrock, so seismically strong, we have a new powerhouse that will last many, many decades and we have a water bypass facility within that powerhouse to maintain river flows downstream if one or two or three of those generators go offline,” Watson said.

BC Hydro was required, through a Park Boundary Adjustment process, to obtain some park land to allow for access and build the project within their 250-acre site located in the middle of the Elk Falls Provincial Park.

The land needed was mostly for the widening of existing access roads through the park to BC Hydro’s property.

When getting approval for the boundary adjustment, Hydro committed to giving more land back to the park than taken out, which may equate to about a six to seven acre net gain to the size of the Elk Falls Park.

“It has been very impressive to follow this massive project so closely since inception, and along that path ensure the various components of Elk Falls Park are protected, restored or enhanced,” Blackmun said. “The end outcome is very favorable. There have been many benefits for the park, the broader Campbell River community and visiting local and international tourists.”

Those end benefits included discussions over the years between BC Hydro, BC Parks and the Campbell River Rotary Club that led to the Rotary Club’s construction of the suspension bridge at Elk Falls.

The release said the available parking was “a show-stopper” for the bridge proposal, as the old parking lots were too small, poorly constructed and located in the iconic old growth forests.

That ultimately led to BC Hydro, given the three-year road closure across the John Hart Dam during project construction, to build a project legacy through a permanent 80-spot parking lot, that included RV and bus parking.

The access road, parking lot and trail system was about a $2 million contribution. Hydro also made a funding contribution of $150,000 towards the suspension bridge construction.

The Elk Falls Day Use Area had annual visitors climb from about 75,000 a year to about 200,000. The suspension bridge is a free attraction that has increased tourism.

“We’ve been working with BC Parks since the very beginning,” Watson said.

He added that, “with the new Elk Falls permanent access and parking in place since 2013, and timed to our decommissioning of the old John Hart facilities this year, we had another commitment to BC Parks to remove the pavement in the original two parking lots within the old growth forest.”

“That work is happening now and is perhaps two weeks from completion,” Watson said. “The final results will further protect the parks old growth trees and the habitat they provide. The work also includes improvements to trails, relocated picnic tables and retaining emergency access.”

“Part of the land package may include the new Elk Falls parking lot, adjacent treed lands with trails and some lower reaches of the Elk Falls Canyon.”

“While the John Hart project was successful in getting a safe, reliable, environmentally benefiting hydroelectric facility, it is also important to work with agencies and the community to mitigate the project impacts as much as possible, and where possible find mutual wins,” Watson said.

“With BC Hydro and BC Parks working closely together since the very beginning we achieved positive outcomes.”

BC Hydro says the old woodstave penstock corridor will eventually return to forest, and better fit within the surrounding parkland.