Snowpack ‘amongst lowest’ in past 40 years in B.C.: River Forecast Centre 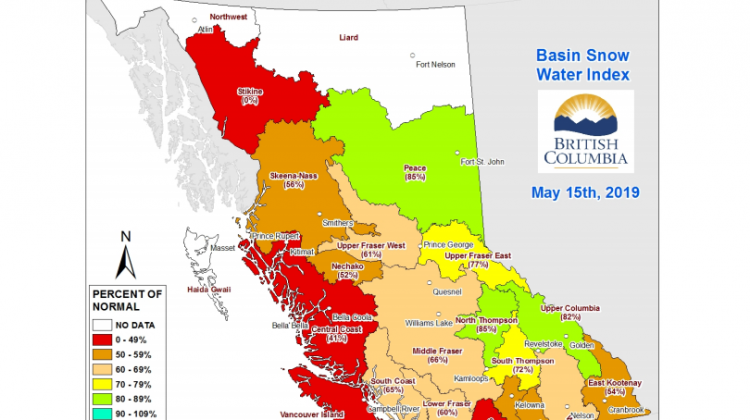 Map used with permission from the Government of British Columbia.

VANCOUVER ISLAND, B.C. – The last 30 days have been bone dry on Vancouver Island and the Sunshine Coast.

According to Environment Canada meteorologist Doug Lundquist, rain has been in short supply over the second half of April and the first two weeks of May.

Lundquist said in Port Hardy, 46 millimetres of rain has fallen compared to the usual 78 millimetres over a 30-day period.

Tofino residents have only experienced half as much rain as usual over the past 30 days, with 59 millimetres compared to 114 millimetres.

“It’s been dry all around the south coast,” Lundquist said.

And there’s no rain in sight for at least the next week – or longer.

“Usually we get some rain in May but the forecast out to a week and perhaps as far out as 10 days is pretty dry,” Lundquist said.

The River Forecast Centre said with diminished snowpacks and early melt this year, risks have shifted towards the increased likelihood of low flow conditions this summer in most areas of the province.

“Along with 2015 and 2016, this year is amongst the lowest May 15th snowpacks that have been observed in B.C. over the past 40 years,” the centre said in a release.

“Spring and summer weather will continue to play a key role in whether or not low flows emerge through the summer.”

Meanwhile, a ridge of high pressure building from the northwest will bring summer-like temperatures over the next few days, with no rain in the forecast.

Temperatures will climb into the mid-to-high 20s across the coast and island as we move into the weekend and early next week.

“It’s not going to really help alleviate it, in the sense that it’s going to remain dry and we usually want to accumulate a little bit more precipitation in May before we get into that hotter part of summer, as we approach June and July.”

Lundquist said it’s impossible to predict if we’ll see any rainfall for the remainder of the month, but Lundquist noted that there’s “a high probability” that temperatures will remain high, perhaps into early June.