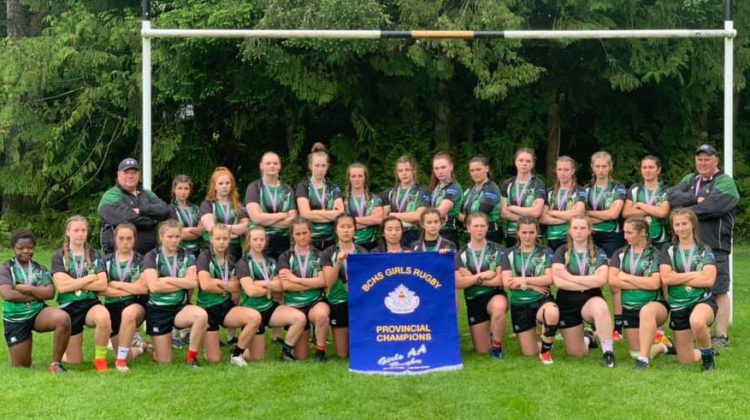 Photo of the G.P Vanier Senior team with their championship banner( Submitted by Coach Steve Fagan)

The Towhees’ girls rugby team came away with a gold medal from last weekend’s B.C. championships at Shawnigan Lake School.

In a rematch of the 2018 provincial title game, the Towhees rolled to a 35-5 win over North Kamloops.

This year marked the fourth time in six years that the Towhees’ have advanced to the gold medal final.

Towhees’ coach Steve Fagan said playing against the NorKam Saints again this year was more difficult, because it felt like they were playing themselves.

“This year they changed their strategies and it was pretty much playing a mirror image of our style,” said Fagan.

He added that despite being up once half time came, the girls needed to push harder in order to win.

“After the half it was 10-5, so I told the girls at the end of the first half, they’re playing a mirror image of us, and the first person to break the glass will win,” Fagan noted.

Fagan also said that the score was not a good representation of how the game played out, as Vanier and North Kamloops fought until the last 20 minutes when his team pulled away.

The Towhees will look to defend their title again next year without some key Grade 12 players, but Fagan says he’s excited to see new faces.

“We have Grade 8s, Grade 9s, and new Grade 10s that will already slide into empty spots, and its just a matter of getting back out on the field next year.”