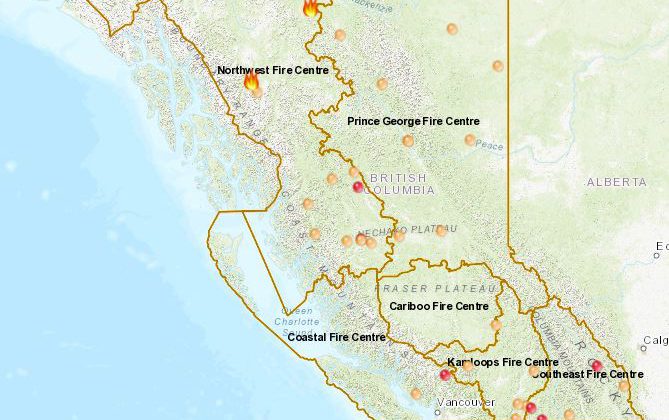 Interactive wildfire map in B.C. as of June 3, 2019. Map courtesy BC Wildfire

VANCOUVER ISLAND, B.C. – Despite warm and sunny conditions, it was a quiet weekend in the Coastal Fire Centre region.

There has only been one small wildfire discovered in the past two days across Coastal B.C. and Vancouver Island.

Information officer Dorthe Jakobsen said the most recent fire, at Green River near Pemberton, is “already done and dusted.”

Since April 1st, a total of 34 wildfires have been reported in the Coastal Fire Centre region, compared to 38 at the same time last year. All of the fires in the region this year have been human-caused (caused by something other than lightning).

“It’s very similar to what was happening last year at this time and it’s also not too far off our 10-year averages,” Jakobsen said.

Across B.C., 245 fires have been reported, including 42 in the past seven days. A total of 93 percent of the fires across the province have been human-caused.

Jakobsen said the weather has cooperated, with slightly cooler temperatures, and hopes people will remain diligent while in the woods and around open fires.

“You can always start a fire,” Jakobsen said. “And you always need to be careful, but the weather does help us, or hurt us.”

On Thursday, a Category 2 open fire prohibition was put in place in the region, which covers south coastal B.C., the most heavily populated area in the province.